Affirming the Dignity in a Hard Day’s Work 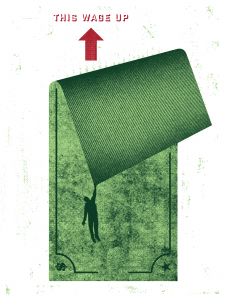 Working hard and taking care of each other are foundational Nebraska values. Our state has one of the lowest unemployment rates in the country and one of the highest rates of parents participating in the workforce. Yet, many of our friends and families are struggling to get ahead despite their hard work. This is because our minimum wage and tipped minimum wage, for jobs that pay through gratuities, are falling short of what Nebraskans needs to support themselves and their families.

Two bills introduced this legislative session would address these issues to affirm the dignity in a hard day’s work and help Nebraska families earn enough to meet their basic needs.

An Annual Adjustment to the Minimum Wage

LB 383, introduced by Senator Dan Quick, would ensure Nebraska’s minimum wage keeps pace with inflation, so families can earn enough to stay afloat in today’s world. As a bit of history, in November 2014, Nebraska voters supported an increase in the minimum wage, which reached $9 per hour in 2016. However, the minimum wage hasn’t been adjusted since, despite increases in the overall cost of living. Senator Quick’s proposal takes a proactive approach to making sure the minimum wage remains sufficient compensation for a hard day’s work by requiring it to be adjusted annually to reflect the consumer price index, with a cap of 3.5 percent.

LB 400, introduced by Senator Megan Hunt, would bring the tipped minimum wage into line with Nebraska’s minimum wage. This long-overdue adjustment would improve economic security and stability for tipped workers, many of whom are primary income earners for their families.

Employers are allowed to pay employees $2.13 per hour as long as that wage plus tips equals the minimum wage at the end of the work week. In instances where an employee’s tips plus the tipped minimum wage fall short of minimum wage, their employer is required to make sure they are compensated fairly, earning minimum wage for their work. It’s important to note that many tipped workers are unaware that their tips and hourly wages must add up to minimum wage, and this requirement is difficult to enforce. As it stands, tipped workers are experiencing poverty at higher rates than other workers.

What Raising Minimum Wages Would Mean for Nebraska

Not only is raising the minimum wage and tipped minimum wage the right thing to do for hardworking Nebraskans and their families, these actions can strengthen our state overall boosting the economy through increased consumer spending, helping employers retain talented employees and increase productivity, and rebuilding our middle class.

LB 383 and LB 400 bills provide workers in minimum-wage jobs the ability to make a reasonable wage, support their families, and achieve a measure of stability. These bills are essential to reducing poverty among our working people and allowing employees to achieve the upward mobility that has been lost to many with a changing economy.

To keep updated on these bills and other legislation Appleseed is supporting this session, subscribe to our weekly Legislative Update.