More Nebraskans are Getting Covered through the Marketplace in 2017

This is a guest post by Appleseed health care intern Suzie Cho. 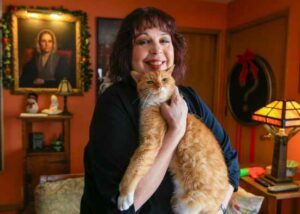 Rayna Collins of Lincoln bought coverage for less than $100 per month.

In recent months, there has been a lot of uncertainty surrounding the Affordable Care Act and the Health Insurance Marketplace. Despite that, the national trend shows that more people have been signing up for marketplace coverage than in previous years.

For many Nebraskans like Rayna Collins, the current open enrollment period just means they are signing up for health insurance like they’ve been able to do every year.

Rayna Collins is a 63-year-old Lincoln native who is a self-employed graphic designer. She has bought her own health coverage since 2000, and she has been insured through the Health Insurance Marketplace every year it has been available.

By shopping around this season and switching providers, Rayna was able to reduce the cost of her premiums from $225 to $78 per month. And it’s not just Rayna: a new analysis finds that about 7 in 10 Americans that qualify for premium subsidies can get plans for less than what it costs to pay the penalty for not signing up. And 4 in 10 could get a Bronze plan for no cost!

Rayna mentioned that friends and family still hold some false myths around Marketplace coverage. Some people have heard that it’s not good insurance, or that it’s unaffordable. “People think that it’s too expensive for them to afford, but for people that qualify for subsidies that’s not true,” she said.

Rayna also mentioned that not only have her out-of-pocket costs been very limited, but that her insurance has met her needs.

“I can’t say it enough; signing up is wonderful and easy! I called [the Marketplace phone number] this year to change my plan twice,” Rayna said.

It’s not too late to sign up for health insurance. The open enrollment period to sign up for insurance plans ends on December 15th for coverage that will start on January 1st, 2018.

You can shop for plans and sign up at healthcare.gov or call the Marketplace Hotline at 1-800-318-2596. You can also go to enrollnebraska.org/local or call 2-1-1 to find free, local enrollment assistance.