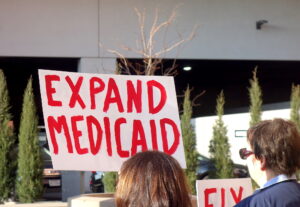 Nebraskans gathered for a “Protect Our Care” rally in Lincoln’s Tower Square on March 27, 2017.

Last week, you helped do something incredible.

Thanks to your phone calls, your emails, and your decision to show up at town halls and support affordable health coverage, Congress has left the Affordable Care Act in place. This means millions of Americans – and thousands of Nebraskans – will be able to keep their health insurance.

But we’ve still got more work to do. Right now, there are about 100,000 Nebraskans who still can’t get health insurance because our State Legislature hasn’t expanded Medicaid. This choice has left many of our friends and neighbors like Diana uninsured and left our tax dollars in Washington, D.C., when they could be helping our state’s health care system and economy instead.

You can help change this! Make a phone call the Nebraska Legislature’s Health and Human Services Committee and urge them to “advance” LB 441, a bill that would let Nebraska make the long-overdue move to expand Medicaid.

You could tell them 1 or 2 of the following:

This issue is too important to be denied debate by the full Legislature. Please call members of the HHS Committee and ask them to advance LB 441.

Your efforts already have saved affordable health insurance for millions of Americans. Now, let’s take the next step to make sure every Nebraskan can get the coverage they need.

Thank you so much for speaking up on an issue that affects all of us.

← STATEMENT: House does not vote on AHCA
Meet our 2017 Interns →