House bill would result in drastic cuts to Medicaid, endangering thousands of Nebraskans

The letter urges lawmakers to protect Medicaid by opposing proposals to change Medicaid’s structure via block grants or per capita caps that would result in radical cuts, endangering the lives of thousands of Nebraskans.

“To put it simply, Medicaid works,” reads an excerpt of the letter. “It is an extremely effective and efficient source of health coverage for nearly 230,000 Nebraskans, the vast majority of whom are children and people with disabilities. Recent concepts suggested by members of Congress and the Trump administration to change Medicaid’s current financing structure raise serious concerns about efforts to dismantle this critical program.”

Download a full copy of the letter and signatories

The American Health Care Act (AHCA), a bill the U.S. House of Representatives reportedly is set to give a vote on Thursday, proposes slashing more than $800 billion from Medicaid nationwide, which would undoubtedly cause thousands of the most-vulnerable Nebraskans to lose their coverage. 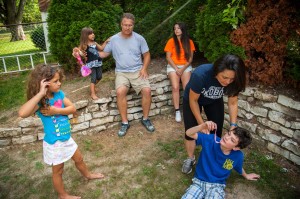 Medicaid allows the Ohlman family to remain employed and still make sure their son, Logan, can get the care and services he needs in his own home.

Danielle Ohlman, of Omaha, said Medicaid allows her family to meet the special health care needs of their 15-year-old son, Logan, who has significant developmental disabilities.

“Medicaid support has allowed my husband and I to remain employed while caring for Logan at home, Ohlman said. “If we were to lose Medicaid support, I would be forced to quit my job to care for Logan or worse, place Logan in a residential facility costing the state much, much more. Medicaid support for my family saves our state from bearing the total cost of Logan’s care.  It also keeps our family together.”

Dr. Cynthia Ellis, vice president of the Nebraska Chapter of the American Academy of Pediatrics, said preserving Medicaid is essential to ensure Nebraska’s children have a healthy start and can reach their full potential.

“Children make up over half of Nebraska’s Medicaid population,” Ellis said, “ and for these vulnerable children, significant cuts to this program put their health in jeopardy by limiting access to the check-ups, immunizations and medical care they need.”

“The Medicaid program provides critical health insurance for low income parents, seniors, children, pregnant women and individuals with disabilities,” said James Goddard, Nebraska Appleseed Health Care Director. “The AHCA would result in dramatic cuts to the Medicaid program in Nebraska, threatening the health of our citizens. The legislation under consideration will take our state and country backwards.”

← Even as she worked to serve others, Rose struggled to get quality insurance prior to ACA
Open Enrollment 2017 Final Report: Nebraska’s Success →