Note: This is a joint blog by Brian Hanson, Senior Policy Associate at the Center For Rural Affairs, and Appleseed Health Care Staff Attorney Molly McCleery.

There was much discussion last spring in Nebraska Legislature about whether we should find a way to help people in our state who fall into the health coverage gap to finally afford health insurance.  Unfortunately, our state leaders again failed to capitalize on a solution to this ongoing problem.

Nebraskans who fall into the coverage gap have no way to get health insurance. They don’t qualify for Medicaid – they either earn more than Medicaid’s very low income threshold (about $11,700 per year for a family of three ) or they don’t fit into other Medicaid-eligible categories (children, elderly, people with disabilities).

But, at the same time, they do not make enough income to qualify for subsidies that would help them buy coverage from the Health Insurance Marketplace. Those making less than 100 percent of the Federal Poverty Level (FPL), which is $20,160 for a family of three, do not qualify for federal tax credits to help them buy coverage from the Marketplace.

Let’s spell this out as simply as possible. In Nebraska, you can be poor – incredibly poor, catastrophically poor – and still not get help to see a doctor. Moreover, you can work, full-time, and still earn too little – not too much, too little – to qualify for tax credits in the Health Insurance Marketplace that would help you buy private coverage.

It’s important to understand just how many of our friends and neighbors fall into the coverage gap. The U.S. Census Bureau’s 2014 American Community Survey (ACS) estimates that about 201,000 Nebraskans are without health insurance, and about 118,000 of them are employed. These people work on construction sites and farms, in restaurants and hotels. They help our kids in school and provide nursing care to people in their own homes.

Now, we can even tell where those uninsured Nebraskans live – and it turns out, they live in every part of our state. The interactive map above shows the county-level estimates of working-age, uninsured Nebraskans, their employment status, and the estimated number of people in the coverage gap who live in each county.

To create our map we used estimates from the U.S. Census Bureau on the number of people without health coverage who make less than 138 percent FPL (about $16,400 for one person), as they would be eligible for coverage if the state chose to expand its Medicaid program as allowed by federal law. These estimates indicate that more than 87,000 people fall into the Medicaid coverage gap statewide.

The table below uses the federal poverty guidelines to show exactly which wage level would put Nebraskans in this limbo of making either too much or too little to qualify for the existing Medicaid program or to receive assistance in buying health coverage.  For example, a family of three with one full-time income of the Nebraska state minimum wage of $9 per hour would fall below 100 percent FPL, but above 58 percent FPL.  Therefore, the parents in this family would fall into the coverage gap. 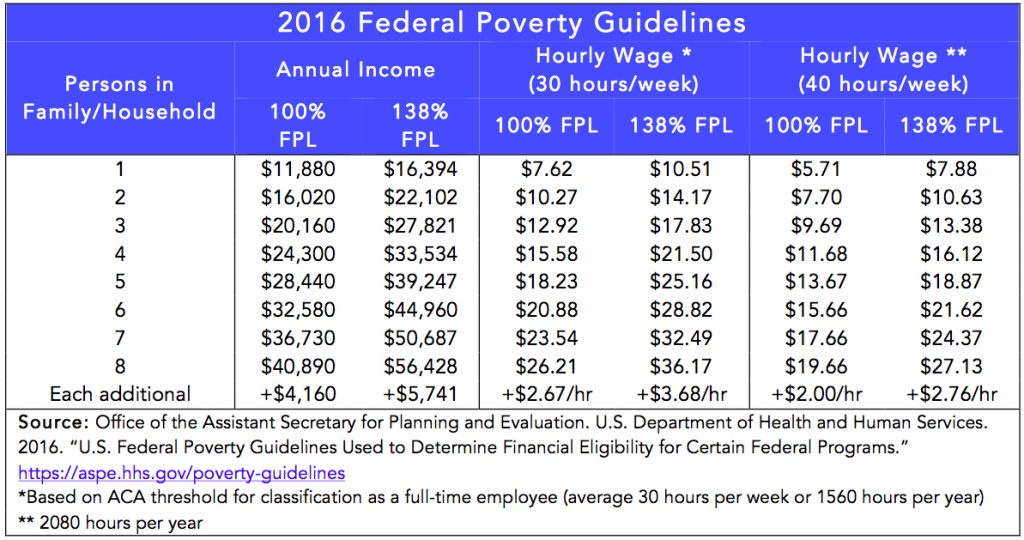 Health insurance is not like buying a bigger TV or a nicer car, it’s something everyone needs. Allowing only one Nebraskan to fall into this gap would be neglectful. But allowing 87,000 Nebraskans to continue to suffer this fate is an outright failure due to negligence on the part of state policy makers.

Over the past four years, Nebraska’s Legislature has debated whether to expand the Medicaid program to cover those caught in this gap just as 31 other states and the District of Columbia have done already. The federal government will fund no less than 90 percent of the program, with the state paying 10 percent of the cost of covering health care for those in the coverage gap.

After four years or waiting, 87,000 Nebraskans in the coverage gap can’t wait any longer for a solution to this problem.  Medicaid expansion would help people like Tracy from Kearney and her husband. They are a few of the thousands of hard-working farmers and ranchers making up the backbone of Nebraska’s economy.  However, they cannot afford health insurance, which is particularly dangerous with the physical demands of their work.

It would also help people like Shawn from Grand Island, who works multiple low-wage jobs to make ends meet and raise his two children, in addition to mentoring young people and helping coach a youth football team.

Expanding Medicaid in Nebraska would help people all across our state have the chance to get healthy, support their families, and be the employees and community members our towns and cities need to thrive.

State leaders need to find a way to work together and end this coverage gap once and for all. Every Nebraskan should have affordable health insurance. Too many have gone without it for far too long.

Interested in staying involved? Keep updated on efforts to close the coverage gap by joining the Insure The Good Life campaign. We’ll be in touch about opportunities for you to get involved in your area. Your voice can make a real difference in the fight for affordable health insurance for all Nebraskans.

*Notes on the data:

The data for the above map is drawn from the 2014 ACS 5-year estimates.  The ACS pools responses from 5 years of ongoing surveys to generate estimates of small population areas, such as many Nebraska counties.  This data is preferable to most one-shot national surveys that would be lucky to sample a handful of people from all of rural Nebraska.  The Nebraska Legislative Fiscal Office estimates about 97,000 people would be covered if Nebraska decides to take the money to expand coverage to those making below 138 percent of the FPL. Our goal of this piece to show you people in the coverage gap live throughout the state with the best available estimates.