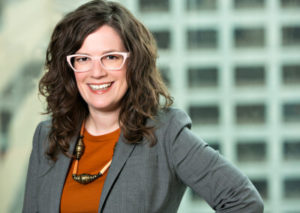 Gretchen Obrist was one of the early leaders of Appleseed’s litigation work on behalf of low-income families.

When Nebraska Appleseed’s earliest advocacy programs were beginning to take shape, our organization needed guidance, a plan, and the energy to follow through.

Appleseed found all of it in a tireless college student named Gretchen Obrist. While still a student at the University of Nebraska-Lincoln, Gretchen started as a part-time employee at Appleseed in 1998, and would become instrumental in our earliest efforts to stand up for the rights of Nebraska women with low incomes.

“Gretchen was the first paralegal for the Welfare Due Process Project, and that meant she really was the driving force behind what we would focus on and how we would do it,” said Milo Mumgaard, Appleseed’s founding executive director. “Gretchen came to Appleseed with extremely well-developed advocacy skills and a strong concern for the legal rights of low-income women, and she became the model for Appleseed’s work from there on out.”

The projects Gretchen helped develop have since become the core of much of the work done by Appleseed’s Economic Justice program. At Appleseed, she developed a resource manual and economic needs assessment tool used by front-line domestic violence and sexual assault advocates, crisis centers, and other direct services organizations throughout Nebraska.

She also got involved with some of Appleseed’s first litigation cases that eventually would influence her decision to pursue her own legal career. Gretchen assisted Appleseed attorneys in a class-action suit that helped secure the rights of mothers to pursue education at four-year colleges as a work activity under the Temporary Assistance to Needy Families (TANF) cash assistance program. This helped low-income mothers improve their skills and job prospects so they could have the opportunity to get ahead.

“I learned from our impact litigation at Appleseed that it truly is possible for one or two individuals to stand up against wrongs that affect many,” Gretchen said, “and bring a case whose resolution could reach well beyond the named plaintiffs and address systemic problems in need of lasting legal remedies.”

After leaving Appleseed in 2000, Gretchen attended law school at the University of Nebraska College of Law and then began her own legal career, which has roots in those early days at Appleseed. She served as a law clerk for federal district court Judge John C. Coughenour in Seattle, and in 2007, Gretchen joined the Seattle firm of Keller Rohrback, L.L.P., where she is now a partner.

At Keller Rohrback, Gretchen continues to pursue complex litigation to protect the rights of hard-working people, including protecting workers from irresponsible practices in the financial services and retirement savings industries, through cases brought under the Employee Retirement Income Security Act (ERISA).

Gretchen also has represented homeowners in mortgage-services related cases and been involved in the firm’s consumer, qui tam, civil rights, and antitrust cases.

“I enjoy representing plaintiffs who otherwise would have no voice against large institutions,” she said. “My work on ERISA issues has been particularly rewarding, because trillions of dollars in Americans’ retirement savings are at risk of waste and abuse.”

It’s no surprise, Milo said, that Gretchen continues to be an influence in helping another organization fight for justice and opportunity for all people in their community.

“In those early days of Appleseed, Gretchen understood the potential of our organization, and the great need for its work in Nebraska,” Milo said. “Gretchen was clearly on track to be a significant public interest legal thinker and leader, and it has been great fun to watch her career continue fighting the good fight.”

One Reply to “Roots of Appleseed – Gretchen Obrist”