Some important bills that impact young Nebraskans are headed to the floor of the Legislature, but first, let’s tell you about an important day to take action this week. 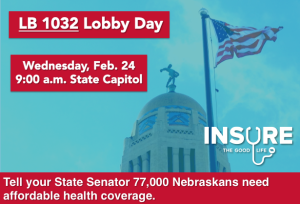 Wednesday morning we invite you to come talk to your State Senator during a special Lobby Day for LB 1032 – the Transitional Health Insurance Program (T-HIP) – at the State Capitol. Meet in Room 1126 on first floor of the Capitol.

RSVP for the T-HIP Lobby Day

LB 746 (Sen. Kathy Campbell) – The Nebraska Strengthening Families Act would clear barriers for children and youth in foster care – young people like Raevin Bigelow – to have important developmental experiences and allow foster parents the ability to make more day-to-day decisions for the youth in their care.

The bill advanced 37-0 on General File debate on Monday morning.

Activity on other noteworthy bills

LB 947 (Sen. Heath Mello) – This bill would ensure that young immigrant Nebraskans who are authorized to work are able to obtain a professional or commercial license to practice their profession and contribute to our state.

This bill was advanced out of the Judiciary Committee last week and received a priority designation from Sen. Matt Hansen, meaning it will be debated by the full Legislature.

LR 35 (Sen. Laura Ebke) – A resolution that calls for Nebraska to join a national constitutional convention that could radically alter the U.S. Constitution will be debated Monday morning. We oppose this resolution because it is risky proposal that could make drastic, unpredictable changes to our nation’s founding principles.

LB 966 (Sen. Bill Kintner) – This bill that would have allowed the state to fine refugee resettlement agencies if a refugee the agency resettles commits a crime, will not be advanced by the Judiciary Committee.

Appleseed joined a large number of other opponents to testify against the bill at a hearing last week because it needlessly and unjustly targets refugees, who do not commit crimes any more frequently than anyone else. It also undermines the outstanding work refugee resettlement agencies do to welcome people from around the world to safe homes in Nebraska.

LB 688 (Sen. Dave Bloomfield) – Would require driver’s license tests administered by the Nebraska Department of Motor Vehicles to be administered in English only. Appleseed opposes this bill because we’re all safer when more people can study for and test their knowledge of the rules of the road.

LB 1095 (Sen. Bill Kintner) – Would create a new state system to register all Nebraska employers and check that they are screening new employees’ work eligibility status through the federal E-Verify database. Appleseed opposes this bill because it would be costly to implement, creates a burden on small employers, and the E-Verify database has proven to have accuracy problems for the population it seeks to verify.