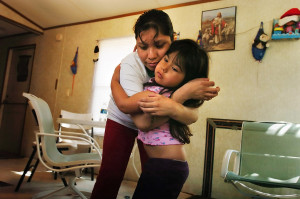 After less than a year working in poultry, Karina Zorita was unable to use her hands for a hug, straighten her fingers, or grab a spoon.
Photo by John D. Simmons/The Charlotte Observer

Oxfam America has recently released an expansive and troubling report on America’s poultry industry entitled “Lives on the Line: The Human Cost of Cheap Chicken”. (you can also read a pdf version of the report here) The report’s immersive website contains many eye-opening and informative web graphics and videos.

The excellent report documents many personal stories from workers, unpacks the dangerous working conditions of poultry workers, and closely examines the economics of the industry. Oxfam’s report only confirms what Appleseed and others have been noting for years: that meatpacking and poultry workers suffer from debilitating, permanent repetitive-motion injuries caused by the speed of work.

While work speeds have remained punishingly fast, workers have not reaped the benefits of increased output and profits of the four companies that control around 60 percent of the poultry market. Oxfam cited an expert who noted that “it’s a ‘race to the bottom’ to find the highest profits for the lowest costs.”

For instance, Oxfam reported that Tyson’s revenue per employee has grown 12 percent each year over the last 15 years, and its stock price increased 82 percent from April 2013 to April 2014. Moreover, poultry output overall has tripled since 1978. Yet, repetitive-motion injuries continue to cripple a large segment of the workforce – the National Institute for Occupational Safety and Health (NIOSH) has recently studied two poultry plants and found that 34 and 42 percent of workers at the respective plants had carpal tunnel syndrome – and wages have remained low.

Oxfam’s report has generated large media interest (Washington Post, Grist, Buzzfeed, Fast Company, Think Progress, The Hill, and Huffington Post, have all had stories on the report). After you read the report, we hope that you also sign on to the petition by clicking “Take Action” on this page. The petition demands companies create safe working conditions, and fair pay and benefits for poultry workers.