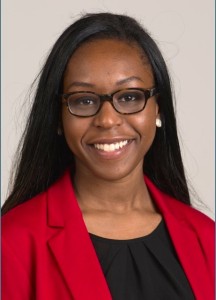 Appleseed intern Gloria Kimbulu was born in Spain to Congolese parents. She is a student at the University of Nebraska.

Appleseed intern Gloria Kimbulu is passionate about immigration law because, well, she is an immigrant herself.

Gloria’s parents are from the Democratic Republic of the Congo, but her dad received a scholarship to study in Spain, where she was born. Her father then received another grant to study at Boise State University, prompting their move to the United States. A year later, Gloria’s family came to Lincoln, making her one of our most-traveled Appleseeders.

She said that this experience of living in different countries has helped her become passionate about helping others and learning about different cultures.

“As an immigrant, immigration is something I’m very passionate about and so working at Appleseed is a dream come true for me,’ she says, “I also know that obtaining affordable health care is something many people struggle with including immigrants, and although I don’t know a lot about health care yet, I look forward to learning more about it.”

Another contributing factor in Gloria deciding to work with Appleseed was spending time last year as an intern at Micah Corps, followed by a week at Appleseed learning about immigration.

Gloria currently attends the University of Nebraska-Lincoln where she is a junior Advertising and Public Relations major. She said that she would like to attend Arizona State University to get a Masters in Social Justice and Human Rights, or go to law school and study immigration law.

In her free time, Gloria enjoys shopping, singing, dancing, and writing. She also spends part of her free time contemplating the joy of mayonnaise, and what food she can use mayonnaise on next. Gloria also enjoys the hit show, Scandal, though we are glad relatively little scandalous behavior happens at Nebraska Appleseed.