Taking a stand against predatory lending 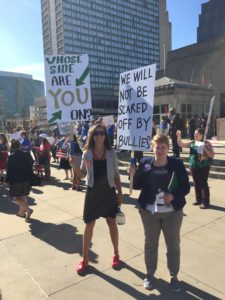 Weitz fellow Tori Ostenso (left) and Appleseed law clerk Kasey Ogle were among the Nebraskans urging for stronger reforms at the CFPB hearing.

Payday lenders are often the last resort for many Nebraskans who have nowhere else to turn to get small loans to pay for an unexpected expense. But payday lenders have a long history of making loans that trap people in a cycle of debt through outrageously high interest rates and unreasonable repayment terms.

On June 2 at a field hearing in Kansas City, the Consumer Financial Protection Bureau (CFPB) released their proposed regulations on payday lending and other small dollar loans. The hearing room was charged on both sides.

Borrower advocates called on lenders to “stop robbing the poor because they are poor!” They told stories about how a debt trap can be nearly impossible to escape when a payday lender’s exorbitant interest rates and high fees lead borrowers further into poverty.

Meanwhile, lenders maintained they provide important access to short-term credit for people in the communities they serve and argued these rules would put many of their employees out of business.

The hearing began as Richard Cordray, Director of the CFBP, gave an overview of the new regulations which include:

The hearing continued with a panel of industry experts talking about the pros and cons of the new regulations. After the panel, the floor opened to public testimony. This is when the tension in the room started to build – the large music hall was packed with people who wanted drastically different outcomes from these rules, and each testifier only had 60 seconds to share their viewpoint.

Two folks in our Nebraska group got up to the stand – Julie Kalkowski of the Financial Hope Collaborative at Creighton and Shaun Ilahi of Habitat for Humanity Omaha. 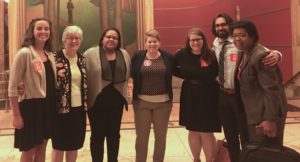 Julie and Shaun took a strong stand against the payday lending industry’s current predatory policies and spoke about the ways they see these loans hurting people in Nebraska. Julie showed evidence to the panel — one of her student’s bills from a payday lender with a 970% interest rate! Our group stood in solidarity with service providers, faith groups, and borrowers from across the country calling for reforms to protect borrowers.

On the other side of the aisle, payday lenders and their employees argued that the CFPB’s new rule would create burdensome requirements and hinder their ability to turn a profit, leaving many of them out of a job. There was hooting, booing, and hollering as these two opposing viewpoints duked it out on the hearing floor for more than three hours.

After everyone was given a chance to speak, the CFBP concluded the hearing. We hopped back into our van, made a quick stop for some Kansas City barbeque, and then headed home feeling exhausted but hopeful about this first step towards national oversight of the payday lending industry.

Let the CFPB hear from you! The CFPB is accepting public comments on their new rules until October 2016. You can click here to leave a comment. Tell the agency the CFPB must change the proposed rule to include clear consumer protection standards like limiting a loan payment to no more than 5 percent of a borrower’s paycheck and giving borrowers a longer period of time in which to repay their loan.

If you have experience using a payday lender, we want to hear your story. Email Nebraska Appleseed’s Kait Madsen or call 1-800-845-3746 and tell us your experience.

One Reply to “Taking a stand against predatory lending”