Since 1996, Nebraska Appleseed has fought for justice and opportunity for for all Nebraskans. Appleseed takes a systemic approach to complex issues – such as poverty, child welfare, immigration policy, and affordable health care – wherever we believe we can do the most good, whether that’s in the courthouse, at the statehouse, or in the community.

In April 2012, a great victory was won for Nebraska children and families.  The Legislature passed LB599, a law which restored prenatal care coverage for all low-income children in Nebraska, regardless of their mother’s immigration status.

Appleseed was at the forefront of the fight to pass LB599, introduced by Senator Kathy Campbell.  We worked with state senators, provided helpful research, analysis and materials, helped lead a broad coalition of advocates, and organized a rally to show support for the bill.

The bill was vetoed by the Governor, however in the end, state senators voted to override the veto by a vote of 30-16, ensuring that all Nebraska children have the chance at a healthy start in life.

The broad show of support for LB599 played a big role in the quick dispatching of a new bill introduced in 2013 (LB518) that would have repealed prenatal care coverage for all low-income children.  The Legislature’s Health and Human Services Committee voted 6-0 to scuttle LB518.

“It just seemed to me like the Legislature had given an answer to the question last year, in a most definitive manner,” said Sen. Kathy Campbell, chair of the HHS Committee. “It didn’t seem to me as if this was an issue ready to come up again.”

Appleseed continues to work to support efforts aimed at improving the health and lives of all Nebraska children so they can have the best chance at a healthy and productive future. 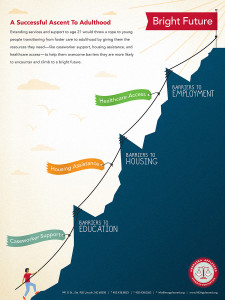 When youth in Nebraska’s foster care system reach the age of 19, the state ceases to be their legal guardian and they are suddenly on their own.  Sometimes they have a plan for next steps; frequently, they do not.  In extreme cases, youth are picked up from their foster or group home on their 19th birthday and dropped off at a local homeless shelter.

In recognition of this heartbreaking injustice to Nebraska’s youth, Appleseed, along with many other partners, targeted advocacy efforts at the local implementation of an opportunity provided by the federal Fostering Connections to Success and Increasing Adoptions Act of 2008.  This law allows states to receive federal matching funds to establish a system of extended services and support to age 21 for young people who age out of foster care.  Research has shown this can improve long-term outcomes for these young adults in a number of areas, including education, employment, and housing stability.

Appleseed worked with local agencies, young people with experience in foster care, and stakeholders across the state to bring this idea to Nebraska.  Two interim studies, LR 305 (2011) and LR 537 (2012), helped raise awareness and gather data, while other collaborative processes, including an ongoing Older Youth Stakeholder Group headed by the Nebraska Children and Families Foundation, resulted in the development of specific program design recommendations and a fiscal analysis of such a program.

All of these efforts lead to the introduction of LB 216, the Young Adult Voluntary Services and Support Act, by Senator Amanda McGill in the 2013 Legislative Session.  This bill extends three main types of services to youth who age out of foster care until they turn 21:

In order to sign up for the program, young adults must be furthering their education, working at least part-time, engaged in a program or activity to find employment, or have a medical condition that prevents them from being able to work or go to school.

Appleseed joined members of Project Everlast to advocate for the program in the press conference and public hearing for LB 216 and spoke with and educated senators on the need for such a bill during floor debate.  Appleseed also initiated a postcard-writing effort, collecting postcards from nearly 200 constituents to show community support for the bill.  These efforts proved successful, and LB 216 was passed by the Nebraska Legislature and signed into law by Governor Dave Heineman on June 4, 2013.  The program, known as Bridge To Independence, began in 2014. 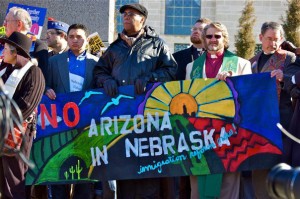 When a harsh, Arizona-style anti-immigrant bill (LB 48) was proposed in Nebraska, Appleseed worked for many months with a wide range of allies to stop a bill that would fracture communities and cause large, unnecessary financial and social costs.

LB 48 was a bill modeled after Arizona’s infamous S.B. 1070, a “show me your papers” law that has now been soundly rejected throughout the United States.  Appleseed helped to lead a broad coalition of Nebraska perspectives who worked to oppose the bill through a legislative hearing, a rally and lobby day of hundreds of Nebraskans, a legislative hearing, meetings with individual senators, and numerous presentations to community groups and institutions.

Among other harmful effects, an Arizona-style law in Nebraska would have:

Appleseed worked extensively to educate senators on the high social and economic costs the Arizona-style bill would impose on the state. We coordinated a broad coalition of allies from diverse perspectives – cities, law enforcement, civil rights, immigrant, business, and higher education. We also worked with immigrant and other community leaders in numerous communities across the state to educate local residents and collect more than 6,700 postcards from people who opposed the bill to deliver to state senators.

We provided opportunities for people to take action at the Concert for Equality in August 2010, inviting hundreds of concert-goers to sign postcards to state senators and make phone calls on the spot to our U.S. senators to work on meaningful reform to modernize our federal immigration laws.  And we coordinated the 2010-2011 art exhibit “Voices From Fremont,” which shared the stories of Fremont residents who witnessed a growing sense of division, hostility, and suspicion in their community since the city passed its own restrictive immigration ordinance in 2010.

Appleseed worked with all of these allies to organize the UNITY Rally For The Good Life, a peaceful rally at the State Capitol on January 27, 2011 which brought together 500 Nebraskans from across the state to oppose the bill.

The Legislature heard the voices of these Nebraskans who did not want such a socially toxic and economically damaging law in our state.  LB 48 was stopped by the Judiciary Committee in 2011 and 2012. 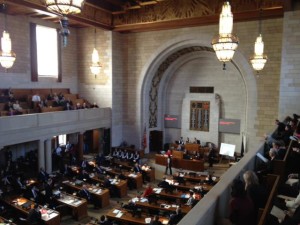 Appleseed worked with senators and stakeholders to pass a package of anti-poverty legislation during the 2013 Nebraska Legislative session that will help low-income, working Nebraskans continue to take steps to lift themselves out of poverty. The legislation included:

LB 240, introduced by Sen. John Harms, allows adults receiving assistance in the Aid to Dependent Children program to meet their work requirement by engaging in employment-related education for at least 20 hours a week.

Under this change low-income parents of all ages can count these hours spent in GED, English as a Second Language, or Adult Basic Education programs toward their weekly participation.  This bill helps remove barriers for those who can and want to pursue education as a means to move out of poverty. It was signed into law by Governor Heineman on May 8, 2013.

Under this program employers will receive subsidies to support wages for a new employee for six months, with the support scaling down to 0% by the end of the six months. To be eligible, prospective employees must be low-income and have a dependant child in their household. This is a win-win for businesses who have the opportunity to expand their operations and for workers who can benefit from acquiring job skills.

Knowing Nebraska parents need to be able to access quality, secure child care in order to go to work and further their earning potential, Appleseed advocated for LB 507 – the “Step Up to Child Care Act.”

LB 507 also creates a quality rating system that tells parents what services child care providers are giving, as well as helping providers to increase their quality of care through assistance and incentives. 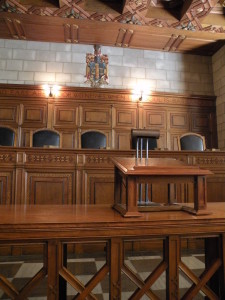 In 2008, a mother who was out of work contacted us with a problem. She struggled to find affordable child care for her child, pay for required medication and a regular cardiology procedure to drain fluid from her heart, and meet the State’s 30-hour per week job search requirement under the Employment First Program, the welfare-to-work component of Nebraska’s Aid to Dependent Children cash assistance program.

While trying to find child care she missed her work requirement and received a sanction. But instead of just losing her cash assistance, as specified under the law, the Nebraska Department of Health & Human Services (DHHS) also stripped her of the Medicaid health insurance coverage which was critical to maintaining her health.

And it wasn’t just this one mother who lost Medicaid coverage, but over 400 other low-income mothers just like her who lost health care access because of the DHHS policy.

Fortunately, she turned to Nebraska Appleseed for help.

Appleseed’s legal team recognized that the Department’s policy of increasing the penalty was illegal under the law created by the Nebraska Legislature. In 2008, Appleseed’s legal team filed a class action lawsuit on behalf of a class of more than 400 low-income parents who received a sanction lasting up to 12 months for not fully participating in the Employment First Program.

“The purpose of the Employment First program is to help people become economically independent as quickly as possible,” said Nebraska Appleseed staff attorney James Goddard, who represented the class members. “Medicaid coverage helps to support and stabilize families working their way to self sufficiency. In this case, the Legislature specifically set the penalty for failing to comply with Employment First and that penalty does not include removing Medicaid benefits.”

The case ultimately made its way to the Nebraska Supreme Court and, in 2010, the Court ruled that DHHS cannot decide on its own to increase the penalty set by the Legislature, and restored Medicaid to our client and 400 other parents. Davio v. HHS, 280 Neb 263 (2010)

“This case is critical to the more than 6,000 low-income parents who participate in the program and who could be subject to this penalty,” said Rebecca Gould, Nebraska Appleseed’s executive director. “Removing access to necessary health care for up to 12 months is crippling to any parent who has a chronic medical condition. This case ensures that low-income parents can maintain their health so they can care for their children and successfully enter the workforce, which is the ultimate goal of welfare reform.” 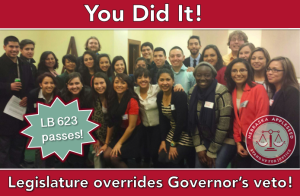 Until 2015, Nebraska was the only state where young immigrants who came to the United States as children and were eligible for deferred action (commonly known as “DREAMers”) were unable to apply for driver’s licenses.

That changed when Appleseed worked with a broad coalition of elected officials, community organizations, business leaders, and DREAMers from across the state to passLB 623, overriding a veto from Governor Pete Ricketts.

Watch video of the veto override vote for LB 623