I Get to Come Home and So Should Everyone Else

Note: This is a guest post from Appleseed intern Vic Klafter. 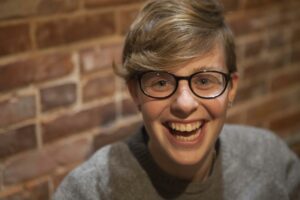 About 37 percent of homeless youth identify as LGBTQ (Lesbian, Gay, Bisexual, Transgender, or Queer) in Nebraska, even though LGBTQ youth are only about 3 percent of the population.

These statistics haunt me.

As a transgender man who came out as gay to my parents in high school, I wonder what my fate would have been had I not had the unconditional love offered to me. Although my parents do not support me as a trans man, nor as a gay woman, which I previously identified as, never did the possibility of kicking me out ever even cross their mind.

And for those children who may not be accepted by their foster parents, group homes, or case workers, or even face abuse or harassment to the point of leaving, I cannot imagine the pain that they carry while trying to be true to themselves. Unlike other states such as Iowa, Ohio, and Colorado, Nebraska has no non-discrimination policy for LGBTQ youth in foster care. Thus, they can be moved from their biological family’s home where they are unsafe to a foster home where they are also unsafe.

This is why I came to Nebraska Appleseed to intern in the child welfare program. I want to work to enhance the sensitivities of everyone–educators, non-profits, universities–to the unique challenges transgender people face, especially in a state such as Nebraska, which doesn’t yet have certain protections for LGBTQ people that other states have adopted.

One of those sensitivities I want to highlight now are the unique challenges that LGBTQ youth face every new school year. With a new school year and new teachers and classmates, a student who is Lesbian, Gay, or Bisexual may have to choose to come out repeatedly or face a new slew of questions and/or disparaging remarks about their sexuality.

Students who are transgender have less of a choice in coming out. Their “choices” are: 1) come out, or 2) be misgendered and suffer the embarrassment and accompanying pain. Challenges like these are increased exponentially for youth who are in the foster care system and may often change schools.

If you’re interested in learning more about these unique challenges and how to make the LGBTQ kids in your classroom or neighborhood more comfortable, you can register for a Human Rights Council webinar on what “Back to School” means for LGBT Foster youth.

My love for Nebraska was renewed over the summer when I spent two months interning in Washington, D.C. for a senator. While in the district I reveled in all that it had to offer but quickly began to miss the slower pace, the bigger sky, the sweeter people of my home state. The last three weeks were very difficult as I grew tired of the breakneck speed at which everything functioned. When I returned to Nebraska, I was instantly relieved as I felt my mom and dad’s solid arms hold me close.

There was no mention of sexuality or gender. I was just a child with my parents, sharing mutual respect and love. It was home. I was home.

Everyone deserves to come home.