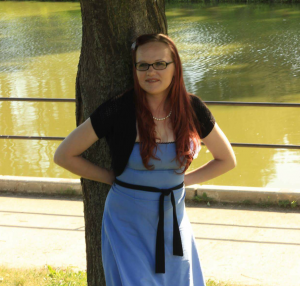 Nebraska Appleseed is proud to recognize phenomenal advocates who have made contributions to the fight for justice and opportunity for all Nebraskans at the 2017 Good Apple Awards: Root Down, Rise Up on October 19th in Omaha.

The Milo Mumgaard Emerging Leader Award, named after Nebraska Appleseed’s founding executive director, recognizes young, emerging leaders who have a vision for the best of what Nebraska can be and, through initiative, hard work, and dedication, are pushing to make their vision a reality.

Nebraska Appleseed works with amazing people in every area of our work. But sometimes, someone comes along who leaves an impact, not just on the work and in their community, but deep in our hearts. Amanda Gershon is one of those people, and we are thrilled to be recognizing her work with the Milo Mumgaard Emerging Leader Award.

“Amanda is the type of person that naturally can bring people together, validate their challenges, and be an example for others to make change in the face of extreme adversity.” wrote Eleanor Dollear, former Weitz Fellow at Nebraska Appleseed, “I could not think of a person more deserving.”

“She’s just tremendously strong as a person,” Trisha Thompson, Intake Coordinator, echoed, “She sets everyone at ease and makes them feel welcome. She’s a natural leader that people want to follow. There’s no limit to what she can do.”

For Gershon, her story of advocacy is deeply personal. For years, she fought a chronic autoimmune disease and fought to stay employed, taking on multiple jobs to help pay for her rapidly increasing medical bills. But her disease often kept her from being able to work. Unexpected medical emergencies and expensive medications threatened her life and made it impossible to make ends meet. Like nearly 100,000 Nebraskans in the Coverage Gap, she was faced with impossible choices, every day.

When Nebraska Appleseed began efforts to expand Medicaid began in 2013, the Insure the Good Life campaign was starting from scratch. Gershon was one of the first to join the Medicaid expansion fight. Despite everything she was going through personally, Gershon quickly became a driving force in the campaign, instinctively taking on a leadership role and bringing others with her as she worked to find a solution to the problem that she and so many others faced.

Rachel Gehringer-Wiar, Field Director, remembers seeing her at a gathering of advocates early on. Gershon was deep in conversation with a woman who, like herself, fell into the Medicaid coverage gap. The woman’s expression changed from one of frustration to amazement as Gershon explained how nearly one-hundred thousand Nebraskans were hurting, sick, and unable to get the care they so desperately needed. She helped the woman realize, for the first time, that she was not alone.

“Amanda inspired so many others to join because of her openness and willingness to share her own story. And her demonstrating perseverance has had a huge impact on others. Her work has helped keep the fight for Medicaid expansion alive,” said Gehringer-Wiar.

Gershon has reenergized the Insure the Good Life campaign over and over again. In the very beginning, she origniated the idea to have regular Medicaid Gap meetings, so that affected individuals could share stories, support one another, and brainstorm ways to impact change. She has testified year after year at the state legislature, despite less than receptive feedback from various Senators on more than one occasion. She’s written letters to the editor, advocated to Nebraska’s congressional delegation, and spoken at events,meetups and rallies. Gershon, in so many ways, has gone above and beyond as an advocate. “One of the first phrases I think of when I think of Amanda is ‘community organizer,” said Dollear.

Countless people have Gershon to thank for learning how they can get involved with health care activism. Whether they contacted their own state senator about a policy change after seeing a Letter to the Editor she wrote, or felt the courage to tell another person about their own personal health care story to follow her example, she is a true trailblazer. She cuts a bold, brave path in which others can follow.

Gershon’s health has dramatically improved since she first came into contact with Appleseed. After finally qualifying for Medicaid, she was able to successfully manage her disease, an incredible personal victory. Still, Amanda continues to fight for health care for those who need it. Even after receiving coverage, she has remained one of the most dedicated voices advocating for Medicaid and Medicaid expansion in the state.

“Amanda has seen exactly what it’s like to have an illness and to not have it, she carries that personal experience and doesn’t want other people to have to suffer the way she did,” said James Goddard, Director of Appleseed’s Health Care Access and Economic Justice Program, “I feel proud to have worked with her on this effort.”

Nebraska Appleseed is so glad to be recognizing Amanda Gershon for all the ways she has been a leader, advocate, and fighter in her pursuit of a more equal Nebraska for all, and we know that we’re not alone in saying that she has changed us for the better. One day, Nebraska will be a place where every person has access to the health care they need. Until then, we know Amanda will be there: lifting up others, making waves, and inspiring everyone she meets along the way.

Thank you, Amanda, for everything you’ve done. We’re honored to know you.

Join us in celebrating Amanda Gershon at the 2017 Good Apple Awards on October 19th. For more information about the event, contact Emma Rasmussen at erasmussen@neappleseed.org.