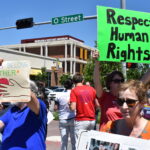 Children and families should have the chance to seek safety and rebuild their lives All people have the right to escape violent situations under international asylum law. Children and families flee their homes due to violence and persecution to seek safe haven in another country. The legal process for claiming asylum is to apply at the border or other ports… Read more →

Seeking political asylum, refugee Joseph Bakura came to the United States in December of 2000. Having initially lived in Maine for six years, he says Nebraska is a very welcoming place. “Nebraska has a large number of Sudanese,” he said. “That’s a good indication that Nebraska is a welcoming place.” Bakura moved to Nebraska for two reasons: 1) he had… Read more →