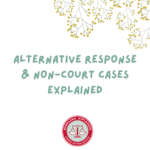 In 2010, Nebraska had the highest rate of children in out-of-home placements in the country. Yet, the majority of Nebraska’s reports of alleged child abuse or neglect are due to “physical neglect,” or poverty, rather than abuse, meaning these families need economic supports rather than removal. Non-Court Involved cases are cases where a report of abuse or neglect has been… Read more →