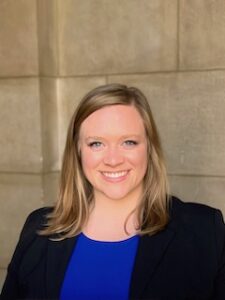 Help us welcome back Kelsey Arends (she/her/hers), the new staff attorney for the Health Care Access Program! While an undergraduate at Nebraska Wesleyan University, Kelsey interned with our Immigrants and Communities team back in 2012! She received her JD from the University of Nebraska College of Law in 2019. Before joining Appleseed, Kelsey was an attorney with Legal Aid of Nebraska’s Health Education and Law Project (HELP). She represented Nebraskans who were referred to the project by their health care providers if they had a legal issue impacting their health. She assisted clients with legal issues including family law, guardianship, wills and powers of attorney, Social Security, Medicaid, and more. Before law school, she was the Director of Operations and Special Programs at Civic Nebraska (known as Nebraskans for Civic Reform at the time).

“Since my internship in 2012, I have followed Appleseed’s work closely. In my previous work providing direct representation to folks who were dealing with both health care and legal issues, I witnessed some of the systemic barriers to access to care that many of my clients faced. I joined Appleseed and the HCAP team to address those systemic issues.” – Kelsey

Outside of her Appleseed role, Kelsey enjoys adventuring to new places and trying out new food! During the pandemic, she’s become a reluctant fan of reality TV. Ask Kelsey about her favorite reality TV shows or her work at Appleseed at karends@neappleseed.org.