Join us throughout the month of October as we celebrate the honorees of its 2021 Good Apple Awards, Appleseed’s annual fundraiser celebrating community advocates who are building a more just, vibrant, and inclusive Nebraska.

The 2021 awardees represent what’s possible when Nebraskans step forward to tackle our toughest problems in the spirit of building community, working collaboratively, and persistently pursuing justice and positive change.

The Jim Wolf Equal Justice Award recognizes a Nebraskan who has made significant contributions to justice for all throughout their lives by stepping outside of the comfort of their day-to-day lives and, without thought for their own economic or political gain, devoted themselves to public service to benefit the common good. Senator John McCollister has used his independent voice in the Nebraska Legislature representing District 20 since 2015. He has dedicated his legislative career to advancing policies that provide opportunity for people paid low wages and people who are immigrants to our country. Taking on these issues was not always popular but he found ways to build consensus in the legislature to get them passed. He has stayed focused on practical solutions that make sense for people and for the state budget. 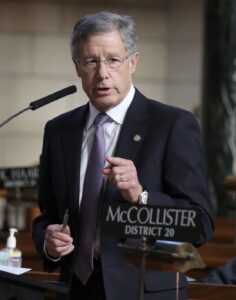 “Not only does Senator McCollister champion and work hard to drive forward policies that strengthen our communities, he does so with such joy and appreciation for the people he’s working with, which makes such a difference during hard work,” said Darcy Tromanhauser, Immigrants & Communities Program Director at Nebraska Appleseed. “On the issue of immigration, Senator McCollister sees the strength that immigrant Nebraskans are in local communities and our state, and he takes a wise, practical, and forward-looking approach to leading state policy that builds on that strength and promotes community inclusion.”

In his first year of the Nebraska legislature, Senator McCollister prioritized and led efforts on the floor to pass the DACA driver’s license bill that allows Nebraska residents of driving age who are covered by the federal Deferred Action of Childhood Arrivals (DACA) program to secure a driver’s license or state identification card. 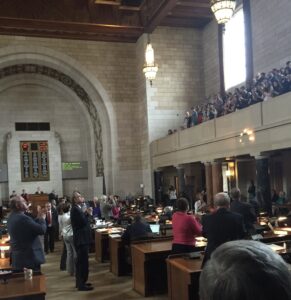 “I will always be grateful for Sen. McCollister’s commitment to support Dreamers. Thanks to his hard work and dedication we were able to pass important legislation that made an incredible difference in our lives!” – Alejandra Ayotitla, a Dreamer Nebraskan.

Senator McCollister was a strong supporter and champion of Medicaid expansion through sponsoring legislation and working to build support with hospitals and policymakers. These efforts helped to make healthcare accessible to many of our most vulnerable and in need Nebraskans. He has also been devoted to food security and access through dedicated efforts towards the state’s SNAP program, having recently helped pass legislation to increase eligibility for working families in Nebraska.

“He has never shied away from working on an issue where the odds are stacked against it,” says Becky Gould, Executive Director of Nebraska Appleseed. “Senator McCollister makes time to talk with and listen to the people living the issues. One of the first things the Senator did when he became the head of the Platte Institute was to reach out to me and Appleseed to explore possible areas of common ground. When he moved into the Legislature, that focus on finding common ground continued. My hope would be that Senator McCollister views this award as recognition of a career dedicated to solving problems, helping people, and achieving what’s possible when people are willing to set aside their differences and come to the table to find the best solution.”

Senator McCollister has given a lifetime of public service through appointments including the Metropolitan Utilities District Board of Directors, Executive Director of Platte Institute of Economic Research, Mid-American Council Board of Directors, Boy Scouts of America Board of Directors, UNL College of Business Administration Advisory Board, One World Community Health Center Board of Directors, and a 35-year career with McCollister & Co., a three-generation family business that manufactured lubricants for large commercial, industrial and private label customers.

To learn about all of this year’s Good Apple Award honorees and how you can contribute to Nebraska Appleseed in honor of them, visit neappleseed.org/goodapple.