Since bill introduction started on Thursday, the Nebraska Legislature has introduced over 300 pieces of legislation. Senators are able to introduce bills through January 20th. So far, we’ve seen legislation put forward to address the lack of essential worker protections, expand access to supportive resources and services for young people, fight food insecurity in our communities, and more. 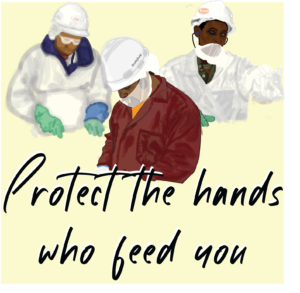 Yesterday, together with statewide community partners and Senator Tony Vargas, we held a virtual press conference to introduce long-overdue legislation for Nebraskans working in the meat and poultry industry.

LB241, introduced by Senator Vargas, would enforce protections such as 6-foot physical distancing in all areas of a meatpacking plant and would require appropriate protective equipment, effective screening and quarantine practices, and transparency about positive cases. Senator Vargas also introduced LB258, which would create basic paid sick leave so Nebraskans can afford to stay home and monitor symptoms rather than being pressured to work while sick.

Listen to worker stories and learn more about the legislation by watching our virtual press conference:

Addressing hunger in the heartland

LB108, introduced by Senator John McCollister, addresses the Supplemental Nutrition Assistance Program (SNAP) “cliff effect” that many Nebraskans face when they have to choose between accepting a raise at work or having their SNAP benefits cut. This cliff effect in SNAP makes it harder for our neighbors to access food needed to feed their families and LB108 would go a long way to alleviate food insecurity in our state.

LB117, introduced by Senator Machaela Cavanaugh, known as the Hunger Free Schools Act, would make school breakfast and lunch meals free to all Nebraska students, regardless of household income.

Expanding access to Bridge to Independence for young people

LB202, introduced by Senator Patty Pansing Brooks, expands access to Nebraska’s successful Bridge to Independence (B2I) to young people currently involved in our state’s juvenile justice system. B2I provides support and services for young people transitioning into adulthood, such as access to medical care and a monthly stipend while they are going to work or school or overcoming barriers.

The last day for senators to introduce legislation is January 20th, with hearings beginning the following Monday, January 25th. We look forward to advocating alongside you to ensure our neighbors are protected in their workplace, children and families have access to nutritious food at home and at school, and young people receive the support they need to be successful.

You can keep up with all the happenings at the Legislature by following Appleseed online. Like our Facebook page and follow legislative hearings in real-time on Appleseed’s Twitter feed. Stop by our blog for opinion pieces, informative updates, and news stories.

We’ll let you know how you can take action to get involved and make your voice heard throughout the session!

Want to support our work? Consider giving a donation today.