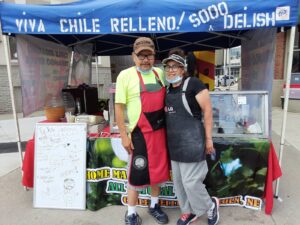 For the past eleven years, Patricia and Antonio have “shared their Philipino and Mexican fusion” foods with those who come to the Farmers’ Market every summer. They are very proud of sharing a “piece of two cultures in one chile relleno.”

Patricia is originally from Durango Mexico and immigrated to the United States twenty years ago. Nebraska was her first and only choice to settle because her husband, Antonio, lived in Lincoln already. Patricia was glad to be with her husband but had no other friends in Lincoln. Until she met Carol. Carol was a professor at the University of Nebraska and had already befriended Antonio.

Patricia describes Carol as “a person I will never forget to this day.” When Carol first came to the house to meet Patricia she brought a gift and an envelope with $20 and a note that said, “Welcome to Nebraska, I want you to eat something delicious.” They were close friends until Carol passed away.

Having a job was very important to Patricia when adapting to Nebraska. She is thankful for her job opportunities and for those given to immigrants. For Patricia, like many immigrants, language was the biggest obstacle while adapting to her new life. “It was of great importance to communicate with people yet it was generally difficult for me during this time. I did not have friends. I only had Carol but we could not communicate like I would have liked to.” Steps to overcome this obstacle began when taking her son to school and attending parent teacher conferences. One of the organizations that facilitated her learning was El Centro de las Américas. There, she attended history, English and citizenship classes. She recalls being, “very happy because when I did not have transportation to attend, I was offered a ride home or to the classes.” Now Patricia feels confident speaking with anyone in English because she was able to attend classes to learn the language.

Patricia’s husband, Antonio de la Rosa, is from Mexico City, Mexico which is ten hours away from Patricia’s hometown of Durango. He immigrated to the United States in 1970. He was on his way to Chicago, “to see the buildings there” and he stopped in Nebraska because “it was on the way.”

What made Antonio feel more welcomed in the United States were other young people. He was young when he arrived and it was easier to adapt.

His job influenced a lot of his first relationships. He was able to find a job in construction, with or without documents. Even better was when he learned English which made him feel great and led him to attend school in Nebraska and obtain his GED. Mexican friends he found in Lincoln also made him feel like he belonged here. He was surprised to learn many people lacked understanding of the immigration system and of the geography outside of the United States, and often made assumptions about him and his family.

They have struggled with lack of resources or knowing where to go for help because they had few friends who could help them navigate their new lives in Nebraska.

Although they made huge sacrifices by leaving their parents and as Patricia says, “half of my heart there”, they are both very proud of being Mexican immigrants, becoming naturalized United States citizens, and working everyday to bring food to the table. What matters most to Patricia and Antonio is their family and unity. They are proud of their heritage and maintain their roots by passing down their culture, language and traditions “everyday, every moment, and in every meal” to their only son. They are just as proud of their son who is graduating from the police academy.