Medicaid Block Grants: Putting the health of Nebraskans at risk.

Last week, the federal Centers for Medicare and Medicaid Services (CMS) released guidance, which CMS refers to as the “Healthy Adult Opportunity,” that encourages states to apply for Medicaid block grants. Block grants will result in cuts to Medicaid, a program that is a lifeline to millions of Americans, including 1 in 14 adults and 1 in 4 children in Nebraska. 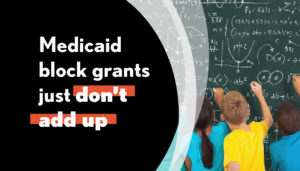 States with block grants will be on the hook for all Medicaid expenses that exceed the federal cap, making block grants a risky gamble.

To encourage states to apply for block grants, CMS is allowing states to cut Medicaid coverage and services with little oversight, all under the guise of “flexibility.” The irony is that, with less federal funding to support the program, states will actually have less flexibility due to budget shortfalls.

This CMS guidance permits states to enact policies to limit or condition Medicaid eligibility, cut coverage for prescription drugs and other benefits, and allow for states to charge premiums to make up for the lack of federal funds. Patient groups, including the American Heart Association and American Lung Association, have been quick to state their strong opposition to block grants, noting that block grants will “reduce access to quality and affordable health care for patients[.]”

This is not the first attempt to cut Medicaid through block grants. In 2017, Congress attempted to pass a bill that similarly proposed block grants. Due to the extensive pushback and evidence that the bill would endanger the health care of millions, the bill ultimately failed. Through this guidance, CMS is illegally trying to do administratively what Congress failed to do back in 2017.

Medicaid provides health insurance for thousands of Nebraskans, including adults, people with disabilities, seniors, and children. Block grants permit states to limit who and when the program might be there to help.

Congress is voting this morning on House Resolution 826, expressing disapproval of the Trump administration’s harmful actions towards Medicaid. We need you to take action and let your Representatives know that you oppose any changes to Medicaid that threaten the wellbeing and health of our families, friends, and neighbors.

Thank you for your advocacy!

One Reply to “Medicaid Block Grants: Putting the health of Nebraskans at risk.”