On October 10, Nebraska Appleseed is celebrating the outstanding contributions of individuals and organizations who have stood up for justice and opportunity for all the 2019 Good Apple Awards. We are proud to introduce you to the honorees we are recognizing this year. 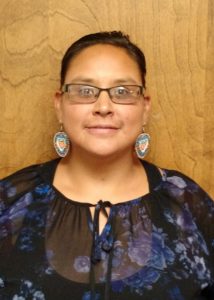 Throughout her career, Misty Frazier has made an indelible mark in her journey to promote and protect her Native American culture, finding her past, present, and future linked in special, sacred ways, and through it all, helping countless Native children along the way.

A member of the Santee Sioux Nation and a descendant of the Tingit of Alaska, Misty is the Executive Director of the Nebraska Indian Child Welfare Coalition (NICWC), a nonprofit focused on advocating for Nebraska’s Native youth in the foster care system. The organization offers trainings, presentations, and consultations around Native American culture and the Indian Child Welfare Act (ICWA).

NICWC’s efforts are led by their spirited, passionate leader Misty. She previously served for 12 years as the Director of the Dakota Tiwahe Service Unit, the Social Services Department for the Santee Sioux Nation. During that time, she was part of a grassroots collective of professionals from the tribal, legal, and social spaces focused on promoting Native American justice. Just last year, NICWC received nonprofit status to amplify their efforts.

“We started as a small grassroots organization in 2008. Very few of us that were at the first meeting are still doing the work, and it has been exciting to see our efforts grow into a nonprofit organization!” said Misty. “We want to ensure that Indian children are culturally connected and their rights are protected. We know that Native children are going to have better outcomes if they are surrounded by their tribe and culture. Our tribal cultures are our protective factors!”

“Working with the Coalition has been one of the most meaningful aspects of my job at Appleseed, much in thanks to the environment Misty has helped to create, one that always centers the needs of Native communities,” said Becca Brune, Appleseed’s Child Welfare Program Associate. “Misty’s passion and confidence quietly yet powerfully leaves any room of advocates energized and motivated to approach social justice work with equity and cultural humility.”

Misty has been a quiet force in advocating for Nebraska’s Native youth, from advocating for passage of the Nebraska Indian Child Welfare Act to developing model training sessions of foster care issues for parents and social service providers, and working across different Native communities to seek system level reform.

“Since Misty was a founding member of the Nebraska ICWA Coalition, she has focused on addressing the unmet needs of Nebraska’s tribal communities. A decade ago when the grassroots Coalition started, there was a need to bring partners together to strengthen ICWA compliance. While this is an ongoing need, great accomplishments have been made in the area thanks to Misty’s efforts and leadership,” Becca added.

Through her leadership and unwavering commitment to Nebraska’s foster youth, Misty found her voice, and through it, amplified the voices of many from the Native communities, helping shape a future where Nebraska’s children are raised with the culture, language, and families they know best.

“It’s exciting to be receiving this award because it means that our work is being noticed and our voice is being heard! It’s encouraging and only encourages me to keep going. Change is slow and nothing ever changes overnight. I’m happy to serve as a representative of my family, my tribe, other tribes, and all Native youth and families.” said Misty.

For her work in her young career, and for the incredible journey ahead of her, we are proud to recognize Misty Frazier with the Milo Mumgaard Emerging Leader Award at the 2019 Good Apple Awards!

Join us in celebrating Misty Frazier at the 2019 Good Apple Awards on October 10th. For more information, contact Edgar Reynaga at ereynaga@neappleseed.org.

← Thank you for standing up for Medicaid expansion! What’s next?
Appleseed welcomes Weitz Fellow Nora Brown →