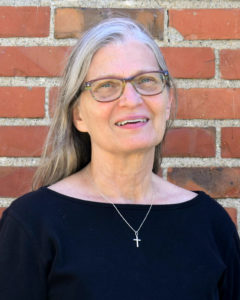 Diane Rolfsmeyer became the Finance and Administrative Coordinator for Nebraska Appleseed in April. She’s from small town Milford, Nebraska and came to Lincoln originally to attend the University of Nebraska. She soon discovered how much she loved Lincoln and been here ever since!

Diane has a long history in finance with 25 years being a Certified Financial Planning Professional in private practice. Diane brings a wealth of finance and analysis experience to Appleseed.

“I so appreciate the opportunity to work with the staff at Nebraska Appleseed. I have respected this organization and the work it has done for many years. In this role, I have the good fortune to support leaders in their work to bring justice and opportunity to all Nebraskans. Nothing can be more fulfilling.”

Diane was the Executive Director of the Nebraska State Historical Society Foundation. She then became the Executive Director of Seniors Foundation where she spearheaded the Foundation’s achievement of being awarded the opportunity to develop the Veterans Hospital site at 600 S 70th St in Lincoln. Just before joining Appleseed, she worked for four years as a Program Specialist for the State of Nebraska in Medicaid.

Diane is a native Nebraskan with roots in agriculture. She and her husband own and operate a small farm in Seward County.  Diane’s areas of interest are in sustainable agriculture, aging in place, enjoying her 14 grandchildren, travel, film, and any experience that stretches her horizons.

We’re thrilled to have Diane on our team. Welcome, Diane!

You can reach her at drolfsmeyer@neappleseed.org.

← Medicaid saving lives for 54 years!
All people deserve a fair chance to have their story heard →