Nebraska Appleseed is proud to recognize advocates who have made outstanding contributions to the fight for justice and opportunity for all Nebraskans at the 2018 Good Apple Awards on October 11th in Omaha. 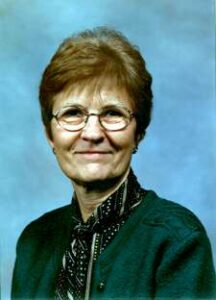 DiAnna Schimek is the recipient of the 2018 Jim Wolf Equal Justice Award.

This year, Nebraska Appleseed has the honor of recognizing DiAnna Schimek with the Jim Wolf Equal Justice Award.

During her 20 years as a state senator in the Nebraska Legislature, DiAnna Schimek was a visionary leader responsible for passing many bills protecting justice and opportunity for all Nebraskans. She was a champion for Nebraska women and families, with a focus on health care, accessible elections, consumer protections, and Native American rights.

She was entrusted to be the chair of the Government, Military, and Veterans Affairs Committee for 10 years and was the chair of the only all-female committee in the Nebraska Legislature’s history, which was convened for a public hearing on sexual harassment.

In 1991, the passage of her bill LB 115 made Nebraska one of only two states, along with Maine, to be allowed to split its electoral votes in Presidential elections, increasing the value of each vote in our state.

She spearheaded efforts to improve access to health care for Nebraska women and children, allow Nebraskans a better chance to find affordable housing, outlaw the use of private prisons in our state, and to let hard-working young immigrant Nebraskans receive in-state tuition rates at Nebraska colleges, giving them more access to affordable higher education.

DiAnna worked hard to give every Nebraskan a voice in their community. In 2005, the Legislature passed a bill, overriding a governor’s veto, to restore the voting rights of people who have completed a felony prison sentence.

Since leaving the Legislature after completing her most-recent term in 2009, Nebraskans have continued to turn to DiAnna for steady and thoughtful leadership. In 2011, she was appointed to the Lincoln City Council to serve out the remainder of the term of the late Jayne Snyder.

Since DiAnna joined the Nebraska Appleseed Board of Directors in 2009, we have been the beneficiary of her wise leadership and passion for justice. She has served on the Board’s Programs Committee providing key advice and strategic guidance on Appleseed’s state policy work.  DiAnna has also continued her advocacy to advance common sense immigration laws at the federal level by helping to bring unlikely allies together from business and agricultural industries to work with immigrant community members and faith leaders.

Some of the amazing things about DiAnna are that she is never afraid to be the first one to champion an idea, she always looks for, and generally finds, common ground among people from all different backgrounds and perspectives, and has a dogged persistence to advance progress on the pressing problems that Nebraska communities face.

DiAnna and her husband Herb, also a former Appleseed board member, have lived in Lincoln for more than 40 years. They have two adult sons, Samuel and Saul.

We are so proud to celebrate DiAnna Schimek with the 2018 Jim Wolf Equal Justice Award. Her decades of work to improve the health and well-being of all Nebraskans, while maintaining their civic rights presents a worthy example of all this award embodies and leaves an inspiring legacy for all who join her in continuing these fights today.

Join us to celebrate DiAnna Schimek at the 2018 Good Apple Awards on October 11th. For more information about the event, contact Morgann Freeman at mfreeman@neappleseed.org