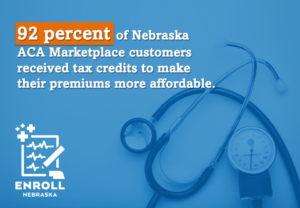 On Tuesday, the Centers for Medicare and Medicaid Services (CMS) released its final report for the 2018 Open Enrollment Period for the Health Insurance Marketplace. Overall, national enrollment of approximately 11.8 million Americans was just three percent below last year’s total. Clearly, there is strong demand for quality and affordable health insurance and the Affordable Care Act’s (ACA) ability to decrease costs for consumers.

The continued demand also indicates that grassroots efforts and the outstanding work done by local organizations were successful in making up for the Trump administration’s decision to significantly cut advertising and outreach for the open enrollment period.

In Nebraska, 2018’s enrollment exceeded last year’s total by 6 percent, a new record of more than 88,000 customers. We ranked 6th in the country for increase year over year indicating that outreach by local enrollment assisters and Enroll Nebraska were successful in getting the word out in innovative ways despite challenging circumstances.

Premiums for Nebraska insurance plans increased like much of the country; however, premium tax credits largely made up for that difference in cost for those who qualified. More Nebraskans than ever received tax credits (92 percent), which brought the price of the average monthly premium down from a year ago.

The report’s state level data shows that enrollee demographics largely remained the same, but some trends deserve note. The proportion of rural enrollments were higher than they have been compared to last two years. This is possibly due to the saturation of news coverage describing the efforts to repeal the ACA and increased interest from low-income customers in rural areas.

Overall, the 2018 Open Enrollment period for the Health Insurance Marketplace was a huge success! Continuing to monitor the trends in enrollment, costs and assistance, as well as efforts to sabotage or destabilize the Marketplace will be a priority as we go forward.

← Schools can apply for Nutrition Equipment Grants to increase meal programs
Nebraskans in the Coverage Gap: “Not having health insurance turns your life into a vicious cycle” →