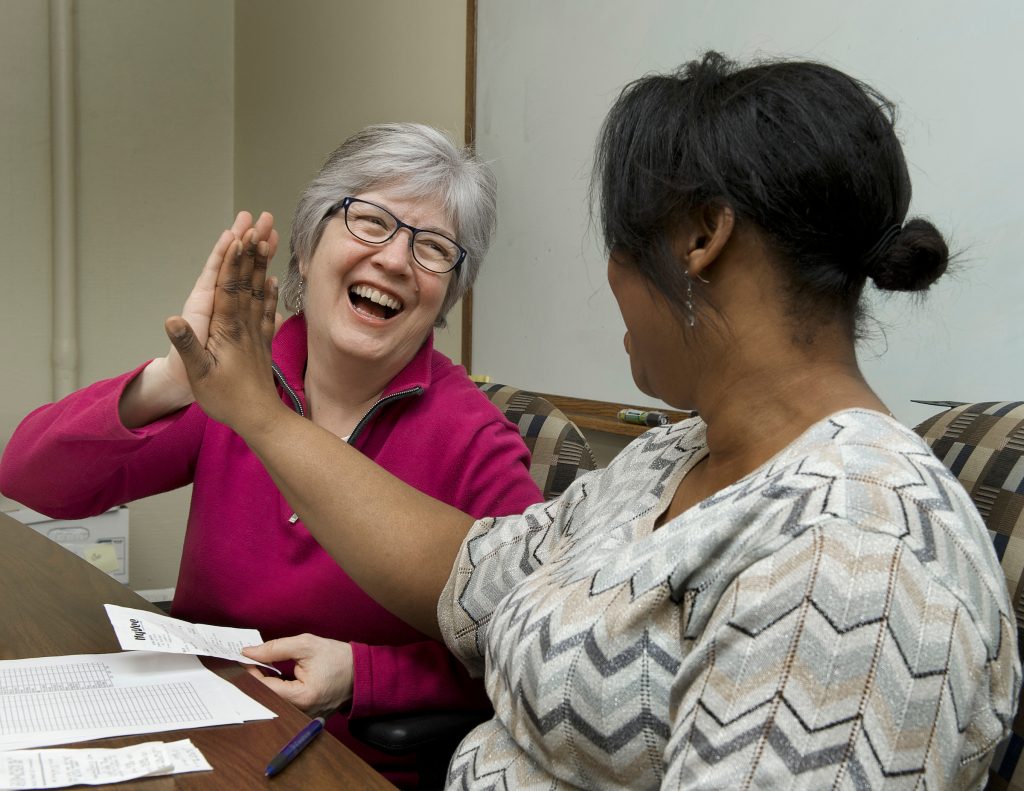 This year, Nebraska Appleseed has the honor of recognizing Julie Kalkowski with the Jim Wolf Equal Justice Award.

For more than 25 years, Kalkowski has doggedly fought for low-income families, connecting them to the financial mainstream. In her work, she puts her personal relationships with low-income Nebraskans first. From that place of deep understanding, she works to address the deep systemic challenges that each individual may face.

“She can absorb a person’s struggle and get it on a very intuitive level,” says Katie Pitts, Director of Public Policy at Nebraska Appleseed, “She has a unique gift for conveying what those real struggles are and how a person’s story connects to the greater problem.”

Kalkowski’s long career working to build a path out of poverty and help Nebraskans reach financial independence has changed the landscape of the state. Ever the pioneer, Kalkowski’s inclusive, collaborative approach led to Omaha’s first Micro Enterprise Program, Nebraska’s first Individual Development Accounts Program, the Omaha EITC Coalition, Bank on the Heartland, and positioned Nebraska as the second state in the country to offer the Save to Win Program.

Since 2010, Kalkowski has served as Executive Director of Creighton’s Financial Hope Collaborative, which combines policy and programming to increase financial literacy and promote social mobility for low-income families in Omaha. Her most recent work explores the links between financial stress and physical and mental health. In the coming years, the Collaborative will replicate a previous study that showed improved health outcomes for single mothers through financial education and coaching, supported by a grant Kalkowski secured from the Robert Wood Johnson Foundation.

Kalkowski has also served on the United Way Worldwide (UWW) National Task Force, which led to the launch of UWW’s Financial Stability Partnership in 2007. In July of 2017, she was appointed to a three-year term on the federal Consumer Financial Protection Bureau’s (CFPB) consumer advisory board, where she will oversee emerging products and practices in the market, and examine the effect they have on consumers.

If her prior watchdogging holds true, Nebraskans are sure to find a passionate advocate in Kalkowski at the CFPB. In 2016, Kalkowski joined Nebraska Appleseed to testify in opposition of predatory lending. During her testimony, Kalkowski brandished a payday lending bill, which belonged to one of her students. The bill showed a staggeringly high 970% interest charge on her student’s loan. Kalkowski submitted the bill to the CFPB in evidence of the industry’s predatory practices.

Kalkowski’s passionate testimony in the 2016 hearing speaks to the deeply personal ties she has to her work. She connects the lived experiences of Nebraskans to policy in a way that is powerful and compelling to everyone she encounters. Her ability to articulate injustice in economic systems could be simply attributed years of experience, research, and knowledge, but Kalkowski brings something more. She truly embodies what it means to live a life of service: not only fighting for those who are impacted but with and alongside those she serves.

That is why Nebraska Appleseed is so proud to celebrate Julie Kalkowski with the 2017 Jim Wolf Equal Justice Award. Her decades of work to build a path out of poverty for all Nebraskans serves as an inspiration to everyone at Appleseed, and we are honored to count her as our partner and ally. She has changed lives through her passion and grit, and surely will continue to change Nebraska through her work and her legacy.

Join us to celebrate Julie at the 2017 Good Apple Awards on October 19th. For more information about the event, contact Emma Rasmussen at erasmussen@neappleseed.org