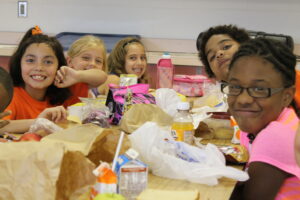 Nebraska community groups can sponsor a summer meals site to feed kids in the summer months.

Access to food is critical to the education and well-being of children in both Nebraska’s urban and rural communities. By using tools such as the summer foods programs to their maximum benefit, we can make sure our kids are healthy and hunger-free throughout the summer months.

For some students from lower-income families, their school is sometimes the only place they are guaranteed to get meals. By providing lunch and breakfast, the two meals that schools generally offer during the school year, Nebraska’s summer food sites can serve these children and make sure our kids don’t go hungry in summer.

The Food Research and Action Center (FRAC), a national advocacy organization that fights hunger, just released their summer foods data report comparing June 2016 summer lunch and summer breakfast participation by state. It shows that although we are making progress with summer lunch service in Nebraska, there is still more work to be done.

According to FRAC, Nebraska is among 22 states that fell short of serving summer lunch to at least one child for every five children who received a free or reduced-price lunch during the regular school year.

Nebraska is also one of only five states that provided summer lunch to less than one-tenth of the number of children who received a free or reduced-price lunch during the prior school year, giving Nebraska one of the lowest rankings in the U.S.

The bottom line: Nebraska ranks near the bottom of the country at making sure children who receive free or reduced-price lunch at school are also receiving needed meals in the summer.

One positive development that could affect these numbers going forward is the loosening of regulation around the Summer Food Equipment grant awarded by the Nebraska Department of Education (NDE). Beginning next year, NDE will be able to award $100,000 worth of equipment (transportation, coolers, freezers, etc.) to summer food sites to increase their capacity and offer meals to more kids. This will hopefully reduce barriers to service and increase both breakfast and lunch participation during the summer.

We know that students who receive free or reduced price meals during the school year still experience food insecurity during the summer. For this reason we encourage communities to add summer food sites and make sure they are serving children in need to the best of their ability.

If your community organization is interested in sponsoring a Summer Food site to help feed children in your community, contact the Nebraska Department of Education, Nutrition Services at (800) 731-2233.

← Meet our 2017 summer interns and law clerks
Appleseed In Action – A summer to speak up! →