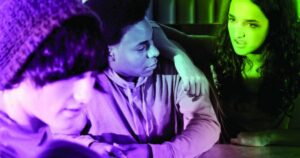 The study by Children’s Rights, Lambda Legal, and the Center for the Study of Social Policy revealed gaps in the child welfare system for TGNC youth.

According to the study, only 5-7 percent of the U.S. youth population are LGBTQ+, but they represent almost 25 percent of youth in foster care, 20 percent of those in the juvenile justice system and almost 50 percent of youth experiencing homelessness. In addition, transgender, gender-expansive and gender-nonconforming (TGNC) youth, who may identify across the sexual orientation spectrum, are overrepresented in these systems at even higher rates than youth who identify as LGBQ.

Definitions from the Safe Havens report:

Nebraska is among the lowest-ranking states in terms of legal protections for TGNC youth in the child welfare system. Nebraska does not have explicit protection against discrimination on account of sexual orientation, gender identity or sex (or gender) in child welfare-specific statute, regulation or policy.

It’s important for all states, including Nebraska, to have licensing, regulations and training, and other requirements that protect the welfare of TGNC youth, in addition to LGBQ youth. Some of these recommended requirements include making sure that definitions of sex and gender are inclusive of everyone, having regulations that promote TGNC youth to express themselves, and creating requirements for staff to be trained to support the needs of youth.

For more details on the ways other states have removed barriers for youth in different child welfare placements, congregate care settings and for those who are homeless, you can read the full report here.