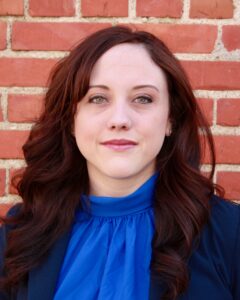 Appleseed is excited to introduce our new staff attorney, Amy Peters, to our Child Welfare team!

Amy, a former Appleseed law clerk, graduated from the University of Nebraska College of Law and recently passed the Nebraska Bar Exam.

At Appleseed, she is excited to put her passion for improving the lives of Nebraska youth in foster care to work.

“I went to law school with the hope that I could use my law degree to help others,” she said. “I can’t imagine a better place to accomplish that goal, nor a better group of people to work with. The opportunity to be a part of the incredible team of advocates at Appleseed is truly a dream come true for me.”

Amy originally is from Bayard, Nebraska – the town closest to Chimney Rock, she excitedly noted. She also received her undergraduate degree from the University of Nebraska-Lincoln and spent a summer studying abroad in an international human rights/criminal law program through the Creighton School of Law that took her to Germany and the Netherlands.

What excites Amy the most about joining the Appleseed team?

“Learning as much as possible,” she said, “and doing my part to influence positive, systemic change for children and families.”