National day of action on immigration. Make your call! 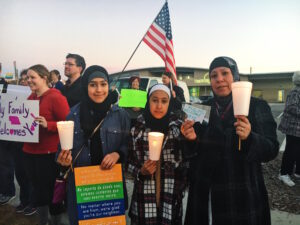 Now is an uncertain time for many Nebraska families because of recent, destructive policy announcements on immigration and refugee resettlement.

Yesterday, the White House released its plans for the recent immigration executive orders. The plans describe a harmful approach that would end longstanding protections for children, promote a massive expansion of detention, and bypass courts and due process.

Will you call our members of Congress today? While they are at home in Nebraska this week, let them know you do not support the recent executive orders on immigration enforcement and refugees. Urge them to speak publicly on the need for humane and common-sense immigration policies that make family unity a priority.

This uncertainty is already doing harm in Nebraska, creating a culture of fear in many communities. Our economy is not strong when employees are afraid at work. Students struggle to learn when faced with the frightening idea that their parents might not be there when they get home from school.

We’ve heard from community members in Nebraska who are worried as rumors fly and families are left to wonder if they are in danger at work, in the community, or in their own homes.

Please make the call today. Tell our Members of Congress to put an end to this culture of fear and restore safe, unified communities by speaking out.

Choose a message that is important to you:

– I am deeply concerned about the President’s immigration executive orders, which will tear apart families, harm Nebraska communities, and disregard the important contributions of immigrant Nebraskans.

– Asking police to take on a new burden of serving as immigration agents keeps them from doing their main job of keeping the community safe. When some members of the community are afraid of contacting the police, we’re all less safe.

– I support Nebraska being a safe home for refugees and oppose these severe restrictions on refugees.

Thank you for taking action to support strong, peaceful, united communities that benefit us all.