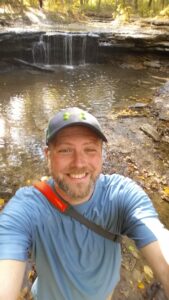 My story begins with a routine check-up. I have insurance through my employer. Really good insurance, actually. But the ACA has still benefited me to a great degree.

I was a young and relatively healthy guy, so it never occurred to me that an annual visit was something I needed to consider, let alone actually schedule.

After I turned 35, I figured it was time to finally bite the bullet and make an appointment. I needed to find a doctor, which I did at One World Community Health. As a gay man, it was important that I find a doctor and clinic which were progressive and responsive to the needs of my particular community. Luckily, there are those options in Omaha.

With the ACA, I knew that routine, preventative care was covered under my plan. I had a whole battery of tests performed. I got a flu shot.  As it turned out, despite my relative youth and physical activity level, I was diagnosed with Type 2 Diabetes. My A1C level at that first appointment was twice what is considered normal. I was put on meds and given information on how to use diet and exercise to combat the disease. Since that diagnosis, I’ve been taken off one of the diabetes drugs.

Without the ACA’s guarantee of coverage for preventative care, I’d probably have put off going to that appointment, and the diabetes would have progressed and could potentially have caused life-changing problems before the symptoms were noticeable enough to cause me to seek treatment. My plan, which includes prescription drug coverage, allows me to afford my medications.

And, since the diagnosis, the ACA has given me peace of mind, that even if I were to lose my good health care plan, I’d be protected from lifetime limits and/or being denied coverage for this preexisting condition.

Even for someone as lucky as myself, someone who is relatively young and healthy, someone with really good employer paid health insurance, the ACA has provided essential benefits and services. For those that are not so lucky, the ACA could literally be the difference between life and death. The ACA may have it’s problems, but it’s better than the old system, and not beyond repair.

Don’t scrap the ACA, strengthen it. Fill in the gaps. Expand access. Americans are worth it.

Call the offices of Nebraska’s U.S. Senators and tell them they must vote “NO” on the Better Care Reconciliation Act. The bill’s cuts to Medicaid and removal of protections for people with preexisting conditions will take health insurance from Nebraskans who need it the most.