The ACA ensured this family could afford coverage, treatment after their daughter was raped

***Be Aware:  This story contains a description of sexual assault. It is told, and the survivor is named, with her permission. 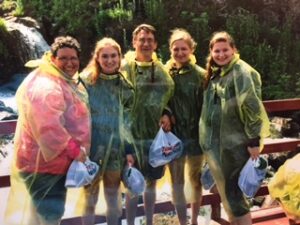 My husband, Alan, and I both teach and make decent salaries, but we have three daughters, two of whom have bipolar disorder. I do as well. We are lucky that we have insurance and everyone is very stable now.  That was not always the case.

Our oldest is now 23.  In 2012, Chelsea was raped on the Nebraska Wesleyan University campus in Lincoln.  She was unable to attend the spring semester of her sophomore year of college.  At that point, were it not for the ACA, we would have been paying totally out-of-pocket for her bipolar medications, psychiatry visits, and counseling visits, not to mention the additional help she needed for trauma recovery.  She was diagnosed with PTSD, adding more to her needs and financial conditions.

She was hospitalized – and suicidal – as well for several days.  We could in no way have afforded the money for that treatment without her insurance.  We would have probably lost our house.  Just four hours of intake interviews waiting to see if she needed to be admitted was $1000 without insurance. That is before actual hospitalization. Thank God and the ACA for not taking away our insurance for her because she was not a full-time student. This happened again this past semester, when she was again triggered suicidal due to her PTSD and rape. She was unable to attend school so she could focus on recovery.  We would have paid it all out of pocket again.

Maybe a family could handle one incident, but we have put out, on average, $10,000 out-of-pocket each year for our family over the last 10 years or so.  Mental illness is expensive, and there have been other health issues as well. Credit cards add up because we have no choice. Our kids need medical help.

Just one other example is the fact that my husband is at high risk for colon cancer and has already, at age 52, had multiple colonoscopies, with more to come more frequently than most. Having those covered is a great help to our very struggling middle class family. I greatly fear how our 2 daughters with bipolar disorder will ever get their own insurance if they take away the ACA, and along with it the guarantee they can get insurance and not be overcharged for it.

Call Nebraska’s U.S. Senators today and tell them they must not vote for ANY bill that forces Nebraskans to lose their health coverage and dismantles Medicaid.

None of the Senate’s recent health care bills meet this important standard. Both the BCRA and Repeal and Delay would cause mass uncertainty in the health insurance markets. Prices would skyrocket and many Nebraskans on Medicaid who need care the most would lose it.