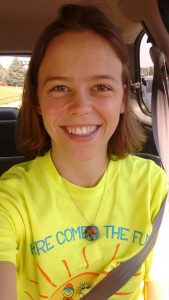 This past December, Bridget graduated from Creighton with a degree in social work, but she’s been helping others ever since high school. She first started volunteer work as a 16 year old at the University of Nebraska Medical Center’s Munroe-Meyer Institute as a way to fulfill her required hours for the National Honors Society, but she never filled out the application.

She’s now worked there for a total of eight years in recreational therapy. “I was lucky I got a jumpstart on what I’m actually interested in because I realized I’m definitely a helping profession kind of person,” she said.

In college, Bridget wrote a paper on the intersection in policy between homelessness and mental health, which is how she became invested in the issue of Medicaid expansion and involved with Nebraska Appleseed. This past Legislative session, Bridget met with State Sen. Joni Craighead and spoke to her about Medicaid expansion — why it’s not only important to Bridget personally, but also to the entire state of Nebraska.

At her practicum site Community Alliance, Bridget works with many clients who have to make the difficult decision each month between working enough hours to have the money to pay their rent and cutting back on hours to remain eligible for Medicaid because it is the only way to cover their essential mental health medications.

“Nobody should have to ask the question ‘Is it more important that I have a place to live or that I take care of my health?’” Bridget said. “I think our representatives need to know that if they are concerned about the mental health care crisis in the country, the best way to start solving it is by making care financially accessible to those who need it.”

Bridget remains a passionate advocate to improve health care access in Nebraska. She sent Sen. Craighead a follow-up letter with more facts about Medicaid expansion, which each of Bridget’s family members read and signed. She then helped deliver other letters to her senator as a part of Appleseed’s “Medicaid Expansion Helps Nebraskans Get Well Soon” balloon delivery action.

When hard work doesn’t get results, it can be discouraging, but Bridget described a story that’s stuck with her for years and reminds her to stay positive. When she volunteered at the Munroe-Meyer Institute, she was paired with a buddy. Her buddy, Braydee, has a developmental disability and has had countless surgeries since she was little, yet she’s one of most positive people Bridget has ever met.

“One day, we were sitting at tables,” Bridget said. “I scooched out my seat and bumped her seat, and I said, ‘Sorry Brady.’ She turned around and said, ‘Me fine, me okay,’ and I was just struck all of a sudden. I have a learning disability, anxiety, and depression, and I was not a good place in high school. She was about to have another heart surgery, and to hear her say that . . . I was just like how can I sit here and be so caught up in myself when she’s so selflessly happy?”

In August, Bridget moved to Minneapolis to volunteer with The Lift Garage through the St. Joseph Worker Program, which provides low-cost car repair to those who couldn’t otherwise afford it.

Bridget’s articulate, friendly demeanor lends itself to her work in the community. Her excitement and passion for helping others shines through all her past, present, and future endeavors.