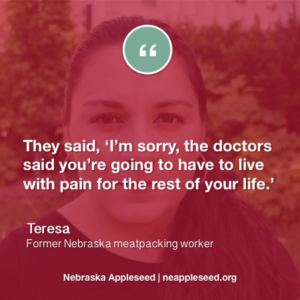 This series does an excellent job highlighting the high rate of crippling, permanent injuries these workers are exposed to — as well as a lack of accountability for the plants who continue to prioritize increased profits over the safety and well-being of their workers.

Part 3: While New Safety Efforts Are Underway, Injuries Are Still Part Of The Job For Meat And Poultry Workers

Appleseed and many partners have long studied the dangers faced by meat and poultry workers, and contributed data to this series. Our community organizer Gloria Sarmiento also spoke with Harvest Public Media for one of the stories about the damaging experiences Nebraska workers have shared with her including crippling injuries, punishing work speeds, failure to receive medical treatment, and even being denied breaks to go to the bathroom.

As Teresa, a former Nebraska meatpacking worker profiled in the series, put it:

“we lose all the dignity and we were humiliated . . . [s]ooner or later, they’re going to get hurt. (The company is) not going to care. They’re just going to throw them away.”

Numerous studies have concluded that this problem has not gotten better over the years. Nebraska meat and poultry workers continue to be treated little better than the animals they process to bring to your dinner plate.

These hard-working men and women deserve safe and dignified workplaces in order to continue to bring Americans a safe food supply. We urge you to call or email Nebraska’s U.S. Senators and your Congressman and tell them to protect Nebraska’s meatpacking and poultry workers.

We also encourage you to sign the petition from Oxfam America to demand poultry processors give their workers safe and fair working conditions by clicking “Take Action” in the upper, right corner of this page.