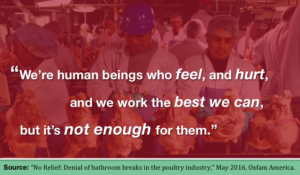 While meatpacking and poultry workers have to deal with crippling work speeds every day that cause high rates of devastating and permanent injuries, they also suffer other abuses and indignities at work which undermine their safety and health.

One of the most common issues that workers consistently point to as a serious safety risk is that employers routinely deny workers access to use the bathroom. These denials come at the great expense of their safety and the sanitary conditions within plants that prepare our food.

Today, Oxfam America released a report – No Relief – in which they and other organizations conducted dozens of interviews with current and former poultry workers. The report documents how the demanding speed of work dictates every facet of work in plants, including how often workers are allowed to use the bathroom.

This focus on production speed at all costs has resulted in disturbing and systemic practices in plants, in which supervisors regularly deny bathroom breaks to workers, create time limits for bathroom use, threaten disciplinary action for taking too long to use the restroom, harass and yell at workers who ask to use the bathroom, and, in one case, charge money for workers who use the bathroom.

As one worker said in the report:

“We’re human beings who feel, and hurt, and we work the best we can. But it’s not enough for them. They demand more and more . . . [t]hey demand more than you can do.”

According to Oxfam’s report, workers must endure an extraordinarily long time before using the bathroom, sometimes an hour or more. The wait causes workers to “urinate and defecate while standing on the line; they wear diapers to work; they restrict intake of liquids and fluids to dangerous degrees; they endure pain and discomfort while they worry about their health and job security.”

In order to deal with these dehumanizing conditions, some workers are forced to wear adult diapers or restrict their intake of food and drink. The exceptional obstacles placed before workers to use the bathroom also produces serious health risks, such as urinary tract infections and kidney damage.

The voices in this new report echo again what Nebraska meatpacking workers said our 2009 survey The Speed Kills You. As one worker put it then:

“Imagine that there are people who urinate themselves on the line. What safety is there in the product?”

Tell Congress that you want them to protect workers by ensuring that they and OSHA have all the tools necessary to make certain that all meat and poultry workers have adequate access to the bathroom. Call or email your representative and senators today: