Friday, Governor Ricketts announced he had vetoed LB 947, the bill that would ensure hard-working young immigrant Nebraskans can obtain their professional licenses and fully contribute their skills to Nebraska’s future. 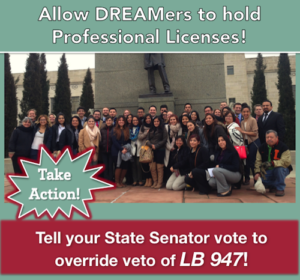 We are deeply disappointed in the Governor’s decision, which lets the skills and talents of thousands of hard-working, work-authorized young Nebraskans go to waste. But there’s still time for you to make a difference!

Contact your State Senator today, and urge to vote to override the Governor’s veto of LB 947. Click here to find your Senator and their contact information.

By vetoing LB 947, the Governor is telling hard-working young Nebraskans – youth who grew up in our state, went to local schools, have work authorization, and want to continue their professions here – that he doesn’t want them in our communities.

But, Nebraska has a brighter future when these hard-working young people can continue their career dreams in our state. We need them to become part of the next generation of teachers, nurses, physical therapists, accountants, and many other professions that are important to each community.

A recent Lincoln Journal Star editorial agreed that Nebraska must be able to benefit from the contributions of the hard-working young people we’ve already invested so much in. LB 947 also is supported by Omaha Mayor Jean Stothert, the League of Nebraska Municipalities, Nebraska Cattlemen, the Omaha and Nebraska Chambers of Commerce, Nebraska Hospital Association, and many others.

Will you contact your State Senator today? Please tell them to vote to override the Governor’s veto so skilled and talented young Nebraskans like Valeria and Armando can contribute even more to the state they call home.

Your voice is important. With your help, these young Nebraskans will be able to add even more to our state’s future and our economy.