Note: Each year, Nebraska Appleseed is fortunate to work with a number of bright and talented interns and law clerks who are passionate about fighting for justice and opportunity for all Nebraskans. We’re pleased to introduce you to our Spring 2016 interns. Special thanks to intern Megan Birman for compiling these stories.

Appleseed currently is looking for interns and law clerks for Summer 2016. If you’re interested in joining us, you can click here to apply. 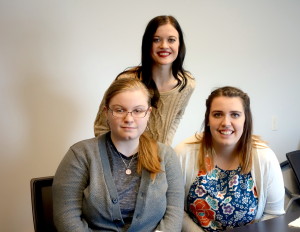 Appleseed interns are a valuable part of our work for justice and opportunity for all Nebraskans.

Valeria Rodriguez is in her second year at the University of Nebraska-Lincoln, where she is double majoring in Spanish and Political Science. Valeria is originally from Mitchell, Nebraska, and enjoys working out, watching movies, and not eating chocolate (she’s allergic!) in her free time.

She established the Define American Chapter at UNL, and spends time searching for scholarships for undocumented students. Valeria wants to learn how to fight for justice, especially among immigration reform, which is what made her interested in Appleseed. In the long term, she hopes to go to law school to become an immigration attorney.

Nathan Klein is originally from Papillion, Nebraska, and is currently a senior at Doane College. Nathan studies Sociology and Law Politics & Society, and will be attending law school after he graduates.

Nathan was interested in Appleseed because of the great work experience and networking opportunities. In his free time he enjoys playing guitar or reading, and is also proud of his extensive film knowledge.

Alexi Richmond is a junior at the University of Nebraska-Lincoln where she studies Political Science and Spanish. During her time at UNL, she spent some time living abroad in Spain with a host family whom she now considers a second family!

In the future, Alexi hopes to work in public policy and legislation. She ended up at Appleseed because of her desire to work with an organization that gives back to the community. Alexi is originally from Whitefish Bay, Wisconsin, and enjoys reading, hiking, and long drives in her free time. 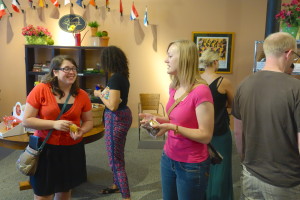 Sometimes we take our interns and law clerks on candy field trips.

Madison Weinberger is originally from Norfolk, Nebraska, but moved to Lincoln to attend the University of Nebraska. She is currently in her fourth year of studying Broadcasting, Business, and Music. Upon graduation, she plans to pursue her Master’s degree and continue a career in communications and/or music.

She took some time off from UNL to travel abroad to Ireland, which she paid for entirely herself with no student loans! Madison wanted to be a part of the Appleseed team because of their contributions to the community and to volunteer her time to others in need. In her free time she enjoys yoga, reading, running, and attending concerts. 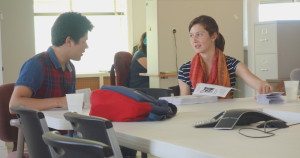 Appleseed interns are assigned to a program area and assist on important projects.

Grace Kelly is a junior at Doane College where she studies Law Politics & Society, Sociology, and Spanish. Grace hopes to continue her education after Doane by either pursuing her doctorate in Sociology or attending law school. She wanted to work at Appleseed because she really enjoyed the idea of “big picture change”, and all of the work Appleseed does to make the world a little bit better.

Grace is originally from Hastings, and enjoys working out, reading, painting, and traveling in her free time. She also once sprained her wrist scooping ice cream!

Megan Birman is a senior at Doane College where she is double majoring in Psychology and Sociology with an emphasis in Criminology. She is originally from Lincoln, where she first heard of Appleseed, and knew she wanted to work there because of her passion for promoting equality for all people.

After she graduates from Doane, she hopes to spend some time living abroad and eventually develop a career in a non-profit organization that focuses on social justice. In her free time, Megan enjoys reading, traveling, exercising, and spending as much time as she can outdoors.

A.J. Miller is a second year grad student at Virginia Commonwealth University where she is pursuing her Master’s in Social Work. A.J. wanted to work for Appleseed because of the breadth of policy advocacy, the opportunity to engage with the Legislature and community, and the exposure to litigation as advocacy.

Her long-term goal is to change as much as she can for as long as she can by going wherever she is needed when she is needed. She views the future as an open opportunity to help a lot of people in need. A.J. enjoys arts, crafts, and writing in her free time and knows a lot about English and Scottish history!

Magdalena Cazarez is a junior Advertising and Public Relations major at the University of Nebraska-Lincoln who grew up in Omaha and was born in El Paso, Texas. This semester, she has worked on graphic designing for the Immigrants & Communities program creating infographics that inform the public on the different positions held in higher systems, such as Governor, Clerk of the Court, and others.

This summer, she also will be working on Appleseed’s statewide civic participation campaign through volunteering and registering Nebraskans to vote.

Akua Dawes is a junior at the University of Nebraska-Lincoln originally from Columbia, South Carolina. She is a pre-law student studying psychology and political science, and later plans to attend law school and obtain her Ph.D.

Akua is interested in helping developing countries construct their constitutions, or becoming a college professor. She wanted to work at Appleseed to gain experience in lobbying and to learn about what goes into bettering a community. Akua is also the treasurer of a diversity enhancement group on campus, and has played the viola for 12 years. In her free time she enjoys watching a lot of movies and attending concerts!

Packy Colgan is currently a junior at the University of Nebraska-Omaha where he studies social work, economics, and mathematics. In addition to his schoolwork, he helped create a rural homeless coalition. Packy has worked on projects alongside Appleseed in the past, which ultimately led to his decision to join the team!

In the future, he plans on studying economics at Oxford and earning a Ph.D in social work and economics at the University of Michigan. In his free time, Packy enjoys playing board games competitively and trying new restaurants. He also has plans to travel the country via train over spring break!

Garrett Conte is a freshman at the University of Nebraska-Lincoln majoring in political science, economics, and math, and minoring in French. Garrett signed up to volunteer at Appleseed to support the cause of Medicaid Expansion, which eventually led to his internship with the Medicaid Field team.

Zoe Hatfield is a sophomore from Omaha who is currently attending the University of Nebraska-Lincoln. She is a double major in political science and global studies, with minors in Asian studies and national security studies. Zoe also spent time volunteering as a debate coach at Lincoln High last semester. She enjoys planning discussions, volunteerism, and speakers to engage students at the University!

Zoe plans to pursue a law degree with the goal of improving relations between the U.S. and China, with an emphasis on human rights. She became interested in working at Appleseed to learn practical political activist skills, while helping make a difference in local issues. In her spare time, Zoe enjoys filmmaking, reading, and political/community activism. Another cool fact about Zoe is that she spent time in India teaching English to Buddhist monks!

The daughter of an engineer and registered nurse, Juliana immigrated to the United States when she was 19 years old. She is currently a fourth year medical student at Creighton University School of Medicine applying for general surgery residencies.

Grace is a freshman at the University of Nebraska- Lincoln majoring in Spanish with a minor in business. She hopes to graduate in three years and join the Navy to be a Cryptologic Technician Interpretive after going to the Defense Language Institute in California to learn some other cool, important language. She’s been at Appleseed since last May and has really enjoyed it.