It was an exciting week at the State Capitol as one of our biggest priority bills faced a first-round vote last week. Plus, Nebraskans got their chance to tell their State Senators why they support health coverage for hard-working people.

This is the final week of committee hearings before the Legislature moves to all-day floor debate next week. 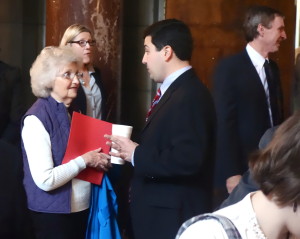 Nearly 70 Nebraskans came to the Capitol to urge their State Senators to support LB 1032.

Last Wednesday, about 70 Nebraskans from across the state came to the State Capitol to urge their State Senators to support LB 1032 (Sen. John McCollister), the Transitional Health Insurance Program Act, at a Lobby Day co-hosted by Appleseed and Center For Rural Affairs.

After a quick meeting, advocates jammed the Rotunda to speak to their senators about the importance of passing LB 1032, which would bring more than $2 billion back to Nebraska’s economy and make health coverage affordable for tens of thousands of working Nebraskans.

Couldn’t make Lobby Day? There’s still chances for you to be heard. Call or email your State Senator and urge them to support LB 1032 so all Nebraskans can get the essential health coverage they need.

LB 746 (Sen. Kathy Campbell) – The Nebraska Strengthening Families Act would clear barriers for children and youth in foster care to have important developmental experiences and allow foster parents the ability to make more day-to-day decisions for the youth in their care.

This bill advanced on General File by a vote of 37-0 on February 22. We thank the senators who voted “Yes” on this bill and ask them to support it in the next rounds of debate.

We’re pleased to let you know LB 947 (Sen. Heath Mello) has been passed out of the Judiciary Committee unanimously. This is the bill that would ensure that young Nebraska immigrants who are authorized to work in Nebraska are able to obtain a professional or commercial license to practice their profession and contribute to our state.

On Thursday, we are joining supporters at a Lobby Day for LB 947 hosted by Heartland Workers Center to urge senators to vote “Yes” on the bill when it comes up for floor debate.

On Monday, Feb. 22, the Legislature voted to recommit LR 35 (Sen. Laura Ebke) to the Government, Military, and Veterans Affairs Committee, effectively stifling the resolution this session. This resolution called for Nebraska to join a national constitutional convention that could radically alter the Constitution.

We opposed this resolution because it is risky proposal that could make drastic, unpredictable changes to our nation’s founding principles.