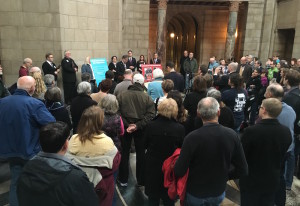 This bill would allow nearly 77,000 Nebraskans who currently cannot afford insurance to get vital health coverage.

The proposal, called the “Transitional Health Insurance Program” or T-HIP was developed with leadership from Senators McCollister, Sen. Kathy Campbell, and Sen. Heath Mello. It was introduced to the public at the State Capitol Tuesday, where nearly 150 supporters gathered for a public press conference to learn about the bill.

We urge you to contact your State Senator and tell them to support LB 1032. We must finally pass a bill that creates a way for every Nebraskan to get the health coverage they need.

Other Important bills introduced this week

Several important bills were introduced in the session’s first week that Appleseed will be following throughout the year.

LB 947 (Sen. Heath Mello) – Would ensure that young Nebraska immigrants who are authorized to work in Nebraska are able to obtain a professional or commercial license to practice their profession and contribute to our state. This bill builds off the great success of last year’s bill (LB 623) that was passed to allow young immigrants known as DREAMers to apply for driver’s licenses.

LB 966 (Sen. Bill Kintner) – A bill that would allow the state to fine refugee resettlement agencies if a refugee the agency resettles commits a crime. Appleseed opposes this bill because it needlessly and unjustly targets refugees, who do not commit crimes any more frequently than anyone else. It also undermines the outstanding work refugee resettlement agencies do to welcome people from around the world to safe homes in Nebraska.

LB 1004 (Sen. Tanya Cook) – Clarifies how state aid to schools will be affected by a school’s decision to take up the Community Eligibility Provision (CEP). CEP is an important tool to allow schools to let all students get the healthy meals they need while reducing administrative time and cost. Appleseed supports this bill.

LB 690 (Sen. Adam Morfeld) – A bill that would remove Nebraska’s ban for people with drug felonies in their past to receive food assistance. LB 690 can remove a barrier to successful reintegration in our communities by eliminating this ban while also reducing hunger for the families affected. HHS Committee, Thursday, 1:30 p.m.

LB 746 (Sen. Kathy Campbell) – The Nebraska Strengthening Families Act would clear barriers for children and youth in foster care to have important developmental experiences and allow foster parents the ability to make more day-to-day decisions for the youth in their care. HHS Committee, Thursday, 1:30 p.m.