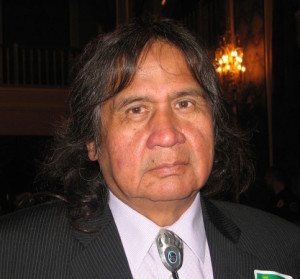 On October 22, we will celebrate the outstanding contributions of Nebraskans who have stood up for justice and opportunity for all at the 2015 Good Apple Awards in Omaha. In the days leading up to the Good Apple Awards, we will be proud to introduce you to the honorees we are recognizing this year.

The Jim Wolf Equal Justice Award recognizes a Nebraskan who has made significant contributions to justice for all throughout his or her career. It is given in the spirit of the late Jim Wolf, a founding Appleseed board member who possessed a lifelong dedication to promoting the common good. The award is given to an individual who is committed to public service without regard to their own economic or political gain.

We are pleased to honor Frank LaMere with the 2015 Jim Wolf Equal Justice Award.

Frank LaMere has built not just a career, but a life on the principles of fighting for people and families who face injustice. An elder in the Winnebago tribe, Frank has an indomitable sense of family, community, and the dignity that lifts them up and makes them strong.

As the Executive Director of the Four Directions Community Center in Sioux City, Iowa, Frank has fought for the rights of children and families in his home community within the Iowa and Nebraska foster care systems. He takes a personal interest in individual cases because every family that can be healthy and united is one more building block of a strong community.

For years, Frank has been a leader in fighting for change in both the Nebraska and Iowa child welfare systems to recognize the importance of the ties to Native culture in cases involving Native families. He was instrumental in establishing the Nebraska ICWA Coalition, which in recent years has successfully implemented several protections to Native children and families in foster care including a Nebraska law (LB 566) passed this year to strengthen our state’s Indian Child Welfare Act.

His passion for Native children and families is passionately displayed each year during the annual “Memorial March to Honor Lost Children,” which highlights that damage done to families and culture by the disproportionately high frequency of Native children being removed from their homes and placed in foster care.

Frank LaMere is a champion for human rights and dignity for people of all races and backgrounds. He has been a tireless leader to reform the outdated U.S. immigration system and ensure that children who have fled violence from other countries can seek a safe home in our state. He has been a powerful voice on protecting the fundamental American right to vote and ensuring that all people should be treated fairly under the law regardless of the color of their skin.

While the fire of many advocates can dim as they get older, Frank LaMere’s passion for justice and dignity continues to burn as bright as ever. He embodies the spirit of this award’s namesake and is a most-deserving recipient of this year’s Jim Wolf Equal Justice Award.