On October 22, we will celebrate the outstanding contributions of Nebraskans who have stood up for justice and opportunity for all at the 2015 Good Apple Awards in Omaha. In the days leading up to the Good Apple Awards, we will introduce you to the inspiring honorees we are recognizing this year. 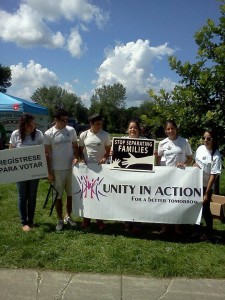 Unity In Action has educated the South Sioux City community on and organized support for updated immigration laws.

In just a few short years, Unity In Action has grown from a handful of people who wanted to figure out how to make a difference, into a strong and growing 501c3 organization regularly inviting hundreds of community members into education and action. Unity In Action is a diverse group of passionate community advocates united in the goal of bringing people together for positive change in the South Sioux City area.

Unity In Action bursts with energy and creativity in their work to engage neighbors to improve life in their region, focusing especially on civic engagement, workers’ rights, and common-sense immigration laws.

In 2014, Unity in Action trained and organized community volunteers to reach out to more than 1,400 South Sioux City voters of color with education about the voting process – making phone calls, talking to people at community festivals, and knocking on doors – ultimately accomplishing more than 1,000 in-person conversations.

The group has used creative social media to share stories and photos of local families supporting common-sense immigration laws through a Stop Separating Families campaign that ultimately sparked action and support throughout the state.  They were an important part of statewide action for driver’s licenses for DREAMers – coordinating with young people from northeast Nebraska to travel to the state capitol and educate elected officials.

At the same time, Unity In Action members continue to draw hundreds of people to community education events to share important information about immigration issues, how to apply for Deferred Action for Childhood Arrivals, and the right to a safe workplace. 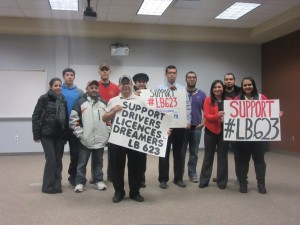 Unity In Action helped support the DREAMers driver’s license bill passed by the Legislature in 2015.

Most impressive, Unity In Action has engaged a diverse group of community leaders in an all-volunteer effort that is inclusive of people from all backgrounds. At any Unity In Action meeting, you may expect to see a mix of older and younger people, students, workers, business owners, labor leaders, and entrepreneurs. The members of Unity In Action show up, and they get things done.

They truly are a grassroots, community-wide effort working for positive change and inspiring the kind of active, engaged community that makes Nebraska strong.

For their collaborative, energetic work to educate, motivate, and empower people in their community, we are proud to honor Unity In Action with the 2015 Roots of Justice Award.