On October 22, we will celebrate the outstanding contributions of Nebraskans who have stood up for justice and opportunity for all at the 2015 Good Apple Awards in Omaha. In the days leading up to the Good Apple Awards, we will be proud to introduce you to the honorees we are recognizing this year. 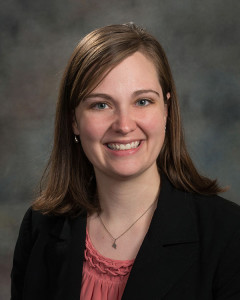 The Milo Mumgard Emerging Leader Award is named after Nebraska Appleseed’s founding director, and It recognizes a young, emerging leader who has a vision for the best of what Nebraska can be and, through initiative, hard work, and dedication, is making that vision a reality. This year, we are pleased to present the Milo Mumgard Emerging Leader Award to State Senator Sara Howard.

Senator Howard’s work both inside and outside the State Capitol has been squarely focused on helping more Nebraskans lead healthier lives by improving access to health care for those who have barriers in their way.

In the Legislature, Sen. Howard has been an outspoken supporter of effective implementation of the Affordable Care Act including expanding Medicaid for more than 77,000 Nebraskans who right now cannot afford health coverage.

As a member of the Legislature’s Health and Human Services Committee, she has helped shape essential policies in our state by advancing bills that remove barriers to treatments for hard-working families, children, and young adults. And she has been a champion for families who struggled to afford the food they need by fighting for bills to strengthen Nebraska’s food assistance programs.

In the past year, Sen. Howard has shown the leadership and vision that embody Appleseed’s call to stand up for justice for all Nebraskans. She has chaired the ACCESS Nebraska Special Investigative Committee to identify ways to fix our state’s public benefits system and ensure our government is working to better serve its constituents.

She has sponsored legislation to improve access to important behavioral health therapies with a focus on healing families and she has been a passionate advocate to increase the number of loving and secure homes for youth in foster care.

Healthy, safe, and secure families have a champion in State Senator Sara Howard, who we are very proud to recognize with this year’s Milo Mumgard Emerging Leader Award.

For sponsorship opportunities for the Good Apple Awards, please contact Nic Swiercek at nswiercek@neappleseed.org or (402) 438-8853 x110.