The Sexual Abuse to Prison Pipeline

One in four girls in the U.S. experiences some form of sexual violence by the time they are 18 years old. Many of these girls end up in the juvenile justice system because they have run away, have substance abuse issues, or are truant from school, all common signs that a young person may have been abused at some point in their life. 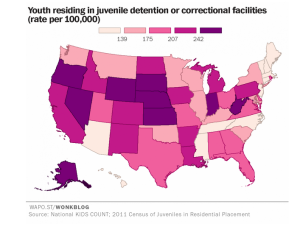 Recent data published in the Washington Post shows Nebraska has one of the nation’s highest rates of youth residing in juvenile detention or correctional facilities.

Many victims of sexual abuse do not receive the necessary trauma-informed care to adequately cope with their abuse. Sadly, these young women often cope with their trauma in unhealthy, dangerous ways that land them in the juvenile justice system. According to the report, these young women are revictimized by juvenile justice facilities that may not have access to mental health services from licensed professionals. There is also a high recidivism rate for this population of young adults and an even higher rate for youth who are involved in both the juvenile justice and the child welfare system. Up to 79 percent of these “dual-system youth” end up returning to the justice system compared to 34 percent of young persons only involved in the juvenile justice population.

The Sexual Abuse to Prison Pipeline report offers policy recommendations including strengthening the Juvenile Justice Delinquency Prevention Act, better utilizing Medicaid funds and providing gender-specific physical and mental assessments and health care in justice settings. To end the sexual abuse to prison pipeline, survivors of trauma, both young men and women, must receive trauma-informed care that does not re-victimize our state’s most vulnerable children.