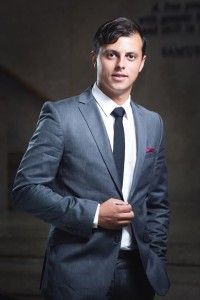 The swag displayed in this photo needs no caption.

Federico could easily call himself a traveler. He started off in Mayaguez, Puerto Rico, and has trekked all around North America, ranging from the Dominican Republic to the U.S./Mexico Border. He says this experience sparked his current path, “Being exposed to various cultures has allowed me to have a broad point of view on domestic and global issues. Being exposed to several perspectives inspired me to pursue a career in international law and spread the importance of global cooperation.”

He ended up at Syracuse University, where he studied International Relations and graduated in the fall of 2014. His college years in upstate New York continued to allow Federico to experience different cultures and communities, “Throughout my years as an undergraduate at Syracuse University I was a member of Student Association, SU student government, eventually being appointed to a cabinet position as Director of Academic Affairs. This experience allowed me to interact with the university’s administration as well as with the whole SU and Syracuse community. Such interactions allowed me to have a clear view of the major issues that growing diverse communities have to endure.”

Federico came to Appleseed because he wanted to help tackle issues that affect a lot of people. “Appleseed has a record of successfully working with the community to change domestic and national policy for the good of Nebraska’s population,” he said.

His future plans include attending law school and working towards a law degree with a focus on international law. He hopes to use this to accomplish his dream of someday working for the International Criminal Court.

In his free time, Federico enjoys watching and playing soccer. He is a big fan of FC Barcelona. Federico also enjoys reading the works of Marcus Aurelius and Niccolo Machiavelli. He also has a countdown until the next Star Wars movie, which he checks almost every day.