Note: This is a guest post from Appleseed intern Lee Kreimer. 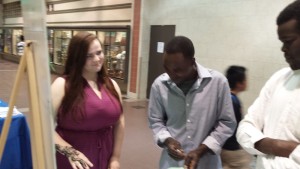 I could list many things that I love about Nebraska. The beautiful countryside, the bike paths, and the friendly neighbors are just a few. After attending Omaha Benson High School’s World Refugee Day Celebration last week, it reaffirmed another thing that I love about my state: diversity.

Many may not be aware of the diverse refugee population that has been settled in Nebraska since the middle of the 20th century and long before. For decades, refugees have transitioned from their war-torn, conflicted, or otherwise dangerous homes to a life in Lincoln, Omaha, and the tri-cities area of central Nebraska. As a native Nebraskan, I love the opportunity to eat food from countries around the world, meet friendly people who have started a new life here, and learn about life from the perspectives of these new Nebraskans. At the celebration for World Refugee Day, I was able to witness a handful of the wonderful contributions that these people make to our state.

One of my favorite parts of the event was the welcome and naturalization ceremony. Groups of young people from Burma and different countries in Africa presented traditional dances from their countries. Audience members were also instructed on the basic ways in which refugee resettlement works in Nebraska. Of course, the naturalization ceremony of 30 new American citizens from all over the world was also a very powerful experience to share.

Throughout the day, a number of organizations in the Omaha area presented information to passersby in Benson High’s hallways. A group of Sudanese women had handicrafts for sale as a fundraiser for their organization. Various non-profits provided information for refugees regarding health care, housing, and other important services available to them in the community. Nebraska Appleseed’s table had a tree on which patrons would write something that is welcoming to new residents in Omaha. As an intern with Appleseed, I enjoyed meeting native Nebraskans and new Nebraskans alike as they shared their favorite things about Omaha.

I’m so glad I was able to attend this event. In addition to meeting new people who are interested in similar work within the community, I met friendly people who love their new country. It was such a pleasure spending the Saturday at World Refugee Day.