Note: This is a guest post from Appleseed Communications Intern Grady Wiedeman. 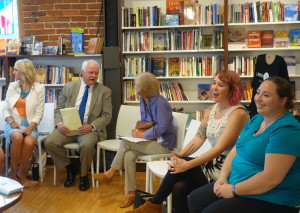 A panel of local advocates and human trafficking specialists led the discussion at Urban Abbey.

It was standing-room only at Omaha’s Urban Abbey on June 30, as a crowd of more than 120 people gathered to discuss ways to recognize and fight human trafficking in Nebraska. Nebraska Appleseed partnered with the Women’s Fund of Omaha to provide a community discussion about human trafficking that was highlighted by a panel of members from various organizations that have a focus on fighting this crime.

The panel included Nikki Siegel from The Bay and I’ve Got a Name, Rachel Davis Pointer from Free the People Movement, Kathy Thomsen from the FBI’s Victim Services, Mary Raynovich from the Salvation Army’s Wellspring Program, and Brooke Carlson from Yes House and Tapestry International. Also there to offer input was Stephen Patrick O’Meara, who is the human trafficking coordinator at the Nebraska Attorney General’s office.

See the full photo album from the event 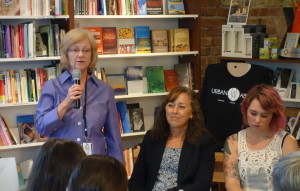 Mary Raynovich (left) of the Salvation Army’s Wellspring Program, talks to the crowd about working with trafficking survivors.

The panel also spoke on the need for assistance in affordable housing in particularly the Omaha and Lincoln areas, as well as the need for greater collaboration in fighting this issue, and a change in the culture of human trafficking, mostly notably recognizing that this problem does happen in our state.

“It is in Nebraska. It isn’t just chains and cages, anymore,” O’Meara said. 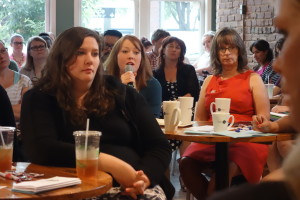 The panel took questions from the crowd of more than 120 people at Urban Abbey.

For more information on the issue of sex trafficking and how it affects children who are in foster care at a higher rate, read our Child Welfare and Sex Trafficking in Nebraska report.