The Coverage Gap in Western Nebraska

The landscape of western Nebraska near Scottsbluff hint at the nearby Rocky Mountains to the west.

SCOTTSBLUFF — It is a more-rugged kind of beauty in the western tip of the state, where the rolling hills and flat plains of eastern Nebraska give way to hints of the nearby Rocky Mountains. As you reach Nebraska’s westernmost counties, portions of earth sharply jump out of the ground as if trying to reach the sky.

The geology and climate also reflects a harsher way of life here. As Americans set out to settle the western U.S. via the Oregon Trail 150 years ago, many of them reached the beginnings of the mountains and set up camp. Those camps became roots and their descendants still live here today where, living a six-hour drive from the state capital, they can feel more kinship with both the environment and the residents of nearby Wyoming or Colorado. 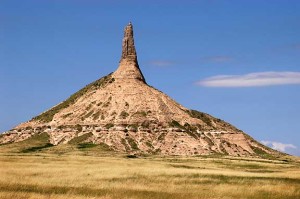 Chimney Rock, just east of Gering near Bayard, is one of the most famous landmarks on the Oregon Trail.

“It feels sometimes like they forget about us out here,” said Linda, a resident of nearby Mitchell, Neb. “Medicine or roads or whatever, I don’t think they pay any attention to us.”

Nebraska’s westernmost counties are among the poorest in the state. According to the American Community Survey, Scotts Bluff, Banner, and Morrill Counties each have poverty rates of at least 15 percent, leaving many to struggle to afford basic needs – including health care.

According to the Center For Rural Affairs, Nebraskans living in rural areas are less likely to have jobs that provide health insurance and are more likely to earn lower incomes than those in the bigger cities. Many people here are forced to view health insurance as a luxury and struggle to get the medical care they need. People like Linda’s son, who left a job in Illinois to move back to western Nebraska to help care for her. After several months at his new job in Nebraska, his company lost their health insurance provider, leaving him an injury or illness away from potential disaster.

In the three Legislative Districts that make up most of western Nebraska, there are more than 5,600 people who fall in the coverage gap, uninsured people between ages 18-64 who make less than 138 percent of the federal poverty level. They’re people that Morgan Weitzel sees every day at the Community Action Partnership of Western Nebraska (CAPWN), where she works to help people examine their health coverage options. Each day, Morgan said, she has to regrettably inform some people their income is too high to qualify them for Medicaid in Nebraska but not high enough to buy private insurance. On some days, it’s as many as one in four or one in five people who come to CAPWN that fall in the coverage gap.

“A lot of these are people whose bodies have been broken by physical labor,” Morgan said. “They work hard. They want to work. Now, they’re just trying to get by as best they can working part time. But, they can’t work if they’re not healthy.”

Regional West Medical Center in Scottsbluff is the primary hospital in western Nebraska and the largest employer in the area.

These Nebraskans are left with no way to afford regular medical treatments they desperately need. CAPWN partners with nearby Regional West Medical Center to provide some services, but even those resources have been reduced in recent years, said Dr. Will Packard, a retired Regional West oncologist, who now volunteers seeing patients at CAPWN.

Lack of access to health coverage forces many, Dr. Packard said, to only come see a doctor when their condition has deteriorated to the point of being unbearable. That makes those conditions much harder – and much more expensive – to treat. If people had access to regular medical care, doctors can diagnose problems when they are more manageable and less expensive to fix, which reduces the financial burden on everyone.

Much of these costs become what’s called “uncompensated care” and are either absorbed by the hospital – which, in the long term, can put them on shaky financial ground – or are passed on to patients with insurance through what is known as “cost shifting” – which increases the price of health coverage for those with insurance.

Expanding Medicaid in Nebraska would solve each of these problems. It would allow those who don’t make much money to have health coverage and access to regular medical care, and would ensure health care providers like CAPWN and Regional West (which is the Scottsbluff area’s largest employer) have the financial resources to keep serving patients in western Nebraska. A study released this year by professors at the University of Nebraska-Kearney found expanding Medicaid would reduce the amount of uncompensated care for Nebraska hospitals by $483 million by 2020. Another report by the University of Nebraska Medical Center said Medicaid expansion would cut uncompensated care costs by 61 percent, stabilizing hospital budgets and lowering the costs shifted on to Nebraska families who do have insurance.

“It would seem like a no-brainer,” said Rev. Lauren Ekdahl, who serves the Gering First United Methodist Church and also is on the Board of Directors at Regional West. “It seems some people sometimes forget the teachings of Jesus Christ when he said ‘do to others as you would have them do to you.’”

The coverage gap is a problem that we desperately need our Legislature to solve. The stories in western Nebraska are not much different from other areas of the state, where hospitals that drive local economies would find financial stability through Medicaid expansion and Nebraskans living in every corner of our state could get the health care they need.

We urge our State Senators to be part of a solution to this problem that isn’t going away. Continuing to do nothing is not an option.