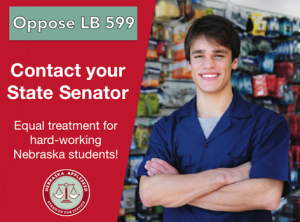 This is your last chance to stop a bill in the Legislature that would cut wages for Nebraska’s hard-working student employees.

LB 599 could be on Final Reading tomorrow. Contact your State Senator NOW and urge them to vote “NO.”

Last fall, Nebraskans overwhelmingly voted to raise our state’s minimum wage to $9 per hour, but LB 599 would allow employers to pay high school student workers less than that.

This bill ignores what Nebraskans voted for last November, and devalues the hard work of young Nebraskans. Our laws shouldn’t allow employers to pay younger workers less than other employees!

Nebraskans believe in treating hard-working people equally and fairly no matter their age. Take action TODAY and tell your State Senator LB 599 is an injustice to young Nebraska workers.

Your voice counts! Use it today.