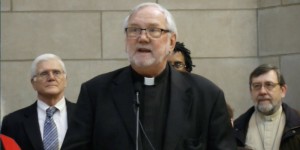 Faith leaders addressed the media at a 12:30 p.m. press conference and delivered copies of the letter to State Senators. The letter calls for State Senators to vote for LB 472, which would close a coverage gap that currently leaves more than 54,000 Nebraskans with low incomes with no way to afford health insurance.

“As people of faith, we believe that each one of us has a moral duty to care for one another,” the letter states. “We know that right now tens of thousands of working Nebraskans are falling into a health care coverage gap. This lack of access to basic physical and mental health care creates much suffering in our communities.”

LB 472 was advanced out of the Health and Human Services Committee last week with a committee priority designation, which means it will be debated by the full Legislature this session.

“It takes resources and people to maintain health, and God calls on us as a people of faith to love one another as God loves us,” said Rev. Keith Nelson, a retired Lutheran minister. “I am proud to tell you that so far, over 175 clergy, women religious and faith leaders from 10 denominations and 22 Nebraska communities have endorsed a faith leaders’ letter asking our Senators to pass LB 472 and to dig into redesigning our Medicaid system so that it is more efficient, more effective and can extend coverage about 54,000 working people who cannot now purchase affordable insurance.”

Rev. Victoria Parker of the Bethel African Episcopal Methodist Church in north Omaha had no insurance for herself and her oldest child when she became a minister before the Affordable Care Act was passed. She now has affordable coverage through the Health Insurance Marketplace, but said Nebraskans who can’t afford coverage need a way to access necessary health care.

“I was praying that neither I nor my son would get sick or require immediate medical attention because we would have no way to pay for it. I am eternally grateful that neither I nor my son became ill during the time we had no insurance,” Rev. Parker said. “How does it make sense that working people who earn even less than I do don’t have the same opportunity to buy health insurance for their families?  What will become of these families who fall in between the cracks?”