Free Omaha tours of The Quilted Conscience project this weekend 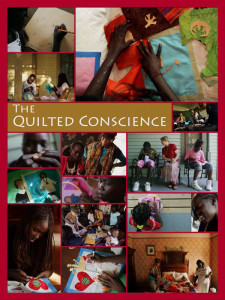 This weekend in Omaha, you have another chance to see a pair of powerful, colorful exhibits of memories-and-dreams quilts from Nebraska immigrant and refugee youth (The Quilted Conscience), as well as a rare opportunity to see Fabric of Survival, a stunning series of quilts telling the story of a Holocaust survivor from her village in Poland through Nazi occupation and ultimately moving to America. (This is the final weekend to see Fabric of Survival.)

In The Quilted Conscience project, what started as a documentary film to inform residents of the changing demographics in America has blossomed into a new and unique way to unite communities. Refugee youth in Grand Island were brought together with Nebraska quilters to create images depicting the girls’ memories growing up in their homelands and the dreams they hold of their future in America.

Many of the Nebraska quilters, who grew up in rural Nebraska, related to the immigrant girls’ memories of fetching water and helping on a family farm as children. They also remembered sharing many of the same dreams of becoming teachers or working in medicine. Through these quilts, the new and longtime Nebraskans from different cultures and generations realized that they, in fact, have a lot in common with one another.

Using quilting as a way to bring people together and unite communities is now taking place in other cities such as Hastings, Lincoln, and Omaha, with beautiful outcomes displayed in Omaha this month.

The Quilted Conscience project currently is on display at 3 Omaha locations:

Van tours on March 14th, March 28th and April 11th are available to take people to the three locations. RSVP to reserve your spot for a free van tour. (All van tours run from 1pm-4pm and begin and end at the Joslyn.)

A short clip of The Quilted Conscience, the film depicting the original Grand Island quilting project, will be shown at the Joslyn Art Museum at 1pm on Saturday (at the beginning of the van tour).