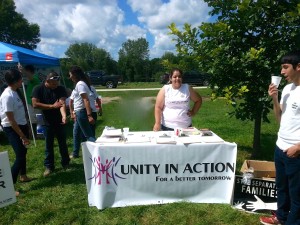 Immigrant and Latino leaders in six Nebraska counties celebrated an election season filled with new outreach to voters of color this year. Community volunteers in six counties reached more than 9,600 voters with basic information about the voting process through door-knocking, phone-banking, and mail.

“We were excited to reach out with information about where and when people could vote,” said Alfredo Alarcon of Centro Hispano in Columbus. “We wanted to say, ‘We’re here to help if you have any questions about the voting process.’”

According to Alarcon, the response was overwhelmingly positive. “We heard over and over again, ‘Thanks so much for calling. This is really good information.’”

From Columbus, to Grand Island, to South Sioux, to Crete, leaders were energized by the number of new volunteers who got engaged in the voting process this year. “We had people who learned phone banking and door-to-door canvassing for the first time,” said Ismael Valadez of Unity in Action in South Sioux City. “And for us as a new organization, it was a great way to get out and get to know neighbors in the community.”

“We know that across the six counties, at least 6,800 conversations took place, giving people the opportunity to get answers to any questions they might have,” said Alex Gibilisco, a community organizer/educator with Nebraska Appleseed who helped support the local efforts and connect leaders across communities to share lessons learned and information. “Many people didn’t know they had the option to vote early or vote by mail. The local community groups were able to grow their volunteer lists and engage new young people – it was a lot of fun to see great leadership development in the process.”